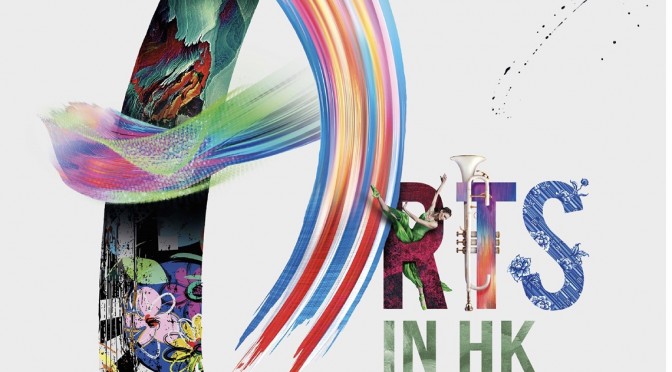 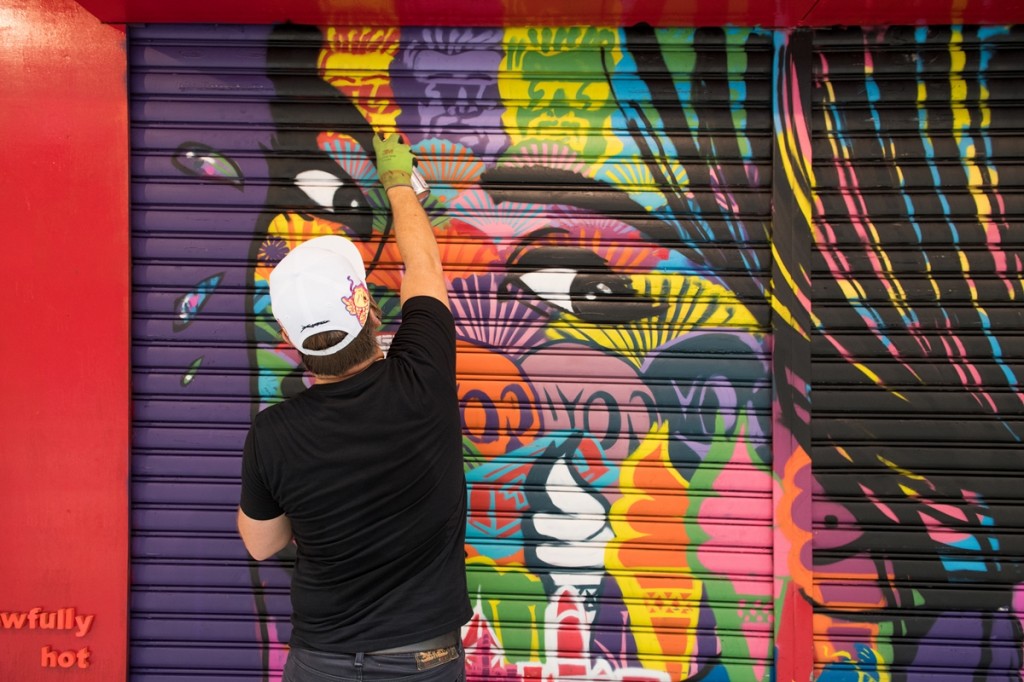 Home to towering skyscrapers and bustling metropolitan streets, it’s easy to assume that Hong Kong is just another sterile city. Yet take a moment to look beyond these urban tropes, and you’ll soon see why you couldn’t be more wrong. Make no mistake, there is more to Hong Kong than meets the eye.

Case in point – along with being Asia’s financial capital, did you know that Hong Kong plays host to one of the region’s most vibrant art hubs? From world-class galleries and exhibitions, to dedicated Art Months, the creative spirit is well and truly alive here. And nowhere is this more evident than on the streets. From the “east-meets-west” inspired murals found in busy Central, to the urban graffiti in industrial Wong Chuk Hang, and colourful hipster delights of Sham Shui Po, street art is transforming the cityscape with bold expressions of artistry. Local and international artists alike have taken to using urban surfaces, big and small, as their canvas.

Ahead, we chat to three such artists to learn more about their street art murals, as well as their favourite Hong Kong neighbourhoods for art and inspiration. 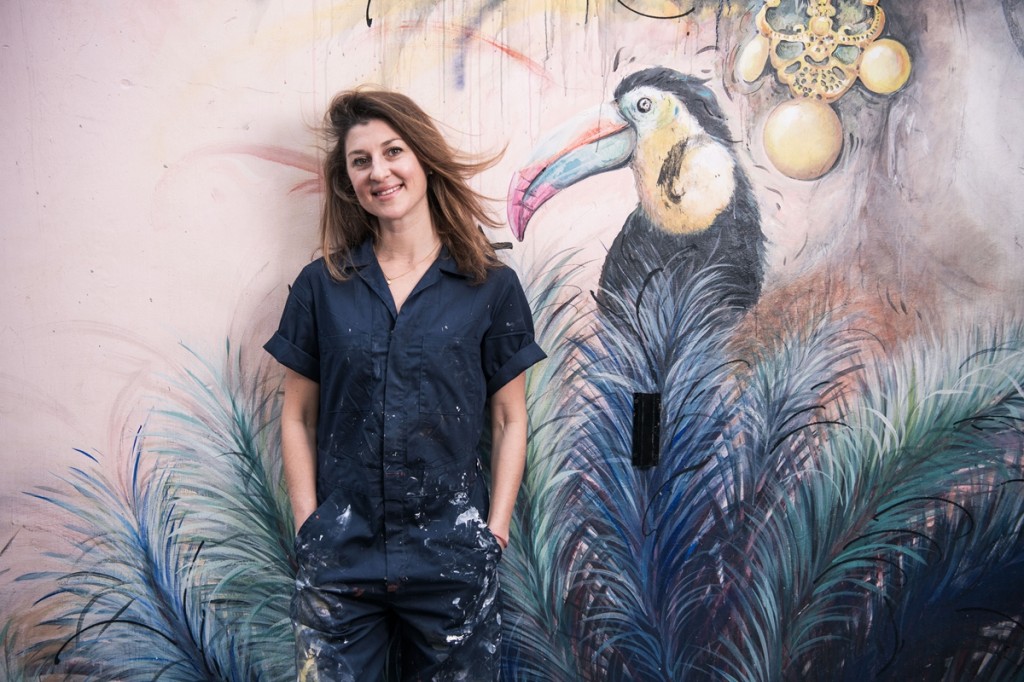 Hong Kong-based French artist Elsa Jean de Dieu has been painting her way through Asia since 2008, leaving her mark with beautifully unique wall murals in Hong Kong, Shanghai and beyond. One of her most beloved works can be found on Soho’s Peel Street, a popular nightlife destination brimming with international cuisine options for the city’s thriving expat population. 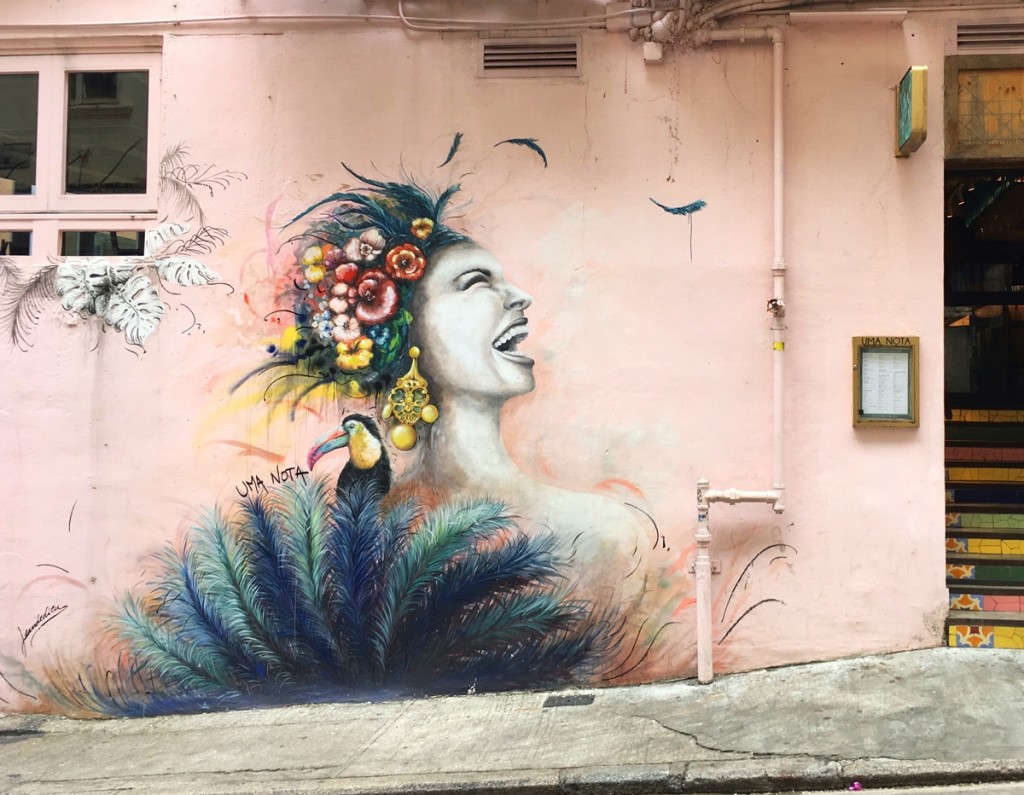 The owners of Brazilian-Japanese street food restaurant, Uma Nota, Laura & Alexis Offe, were looking for an artist to create a joyful mural that combined the cultures of both countries. When they approached me, it didn’t take long for me to get completely hooked on the concept and to create something aligned with their vision. I was very much inspired by our discussion, and I came back to them with this Brazilian lady full of energy and joy, painted with lots of vivid colours. The pink colour of the facade alludes to Japanese sakura flowers, and I also included flying gingko leaves to link the main artwork on the facade to the inside of the restaurant. 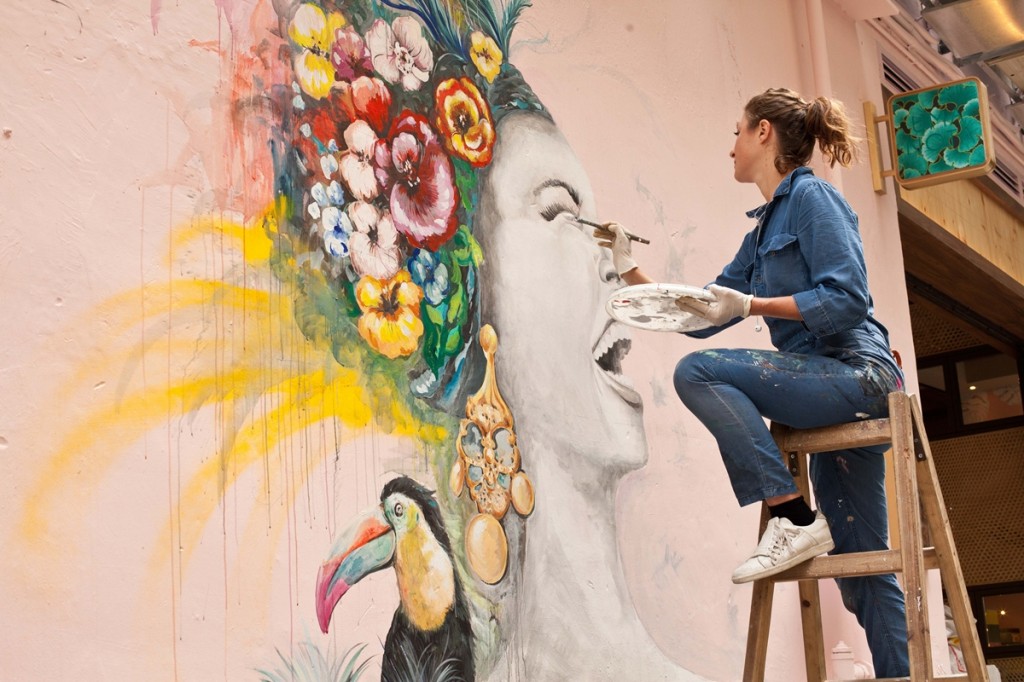 What has been the public reaction to your piece?

At first I wasn’t sure if a mural painted by a foreigner would be accepted by the local neighbourhood, but I realised very quickly that people instantly connected with the artwork, and many were so happy to talk to me and take selfies in front of the mural while I was painting. I believe artwork can create a spontaneous connection beyond our cultural differences, and that’s the reason why I decided to keep spreading happiness and positive vibes through my art by painting as many smiling faces as possible throughout the city!

What is your favourite street or neighbourhood for street art in Hong Kong?

I love Soho – it’s very easy to spot different artworks just by taking the escalators. I’m also a fan of Sheung Wan and all the streets adjacent to Hollywood Road because it reminds me of the Marais in Paris, with all the cafes and super trendy artsy shops. Artlane in Sai Ying Pun also offers wonderful artworks made by various talented artists. 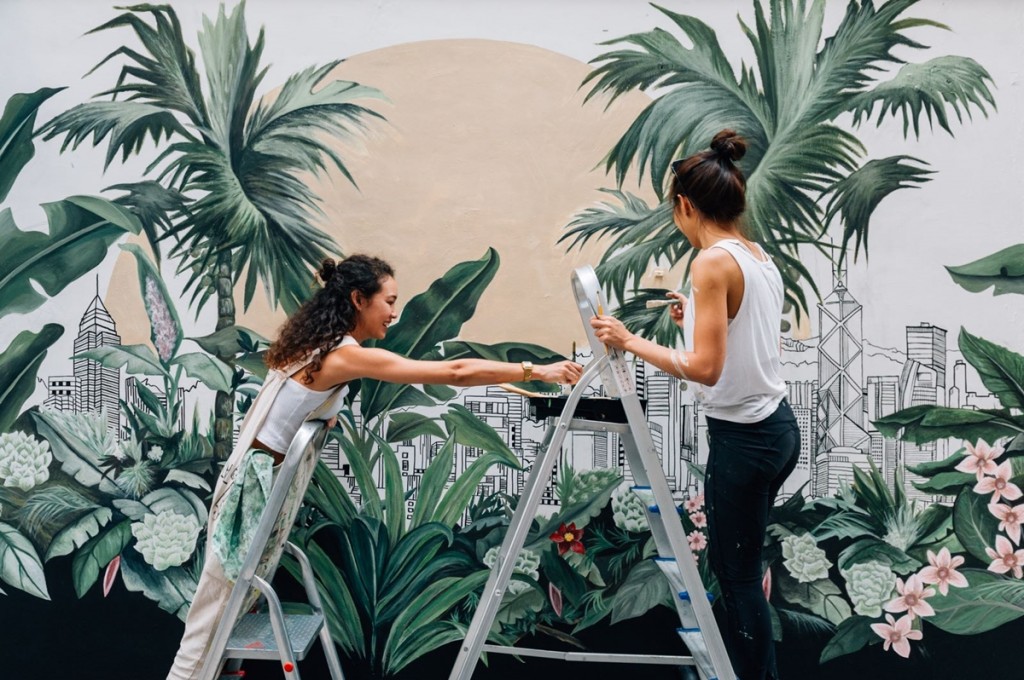 “Creative hustlers” Carol Mui and Rebecca T Lin look to the beauty of nature for their greenery-filled murals. These two friends started their mural business in 2017 to help offices, restaurants and shops transform their walls with art, and have since worked with clients like DBS, Lululemon and Pizza Express. Uniquely balancing dreamy streetscapes with luscious depictions of plantlife, the duo’s signature style is anchored in Carol’s philosophy of “slowing down”, whilst drawing on Hong Kong-born Rebecca’s dedication to home and heritage. Their piece at landmark revitalisation project, The Mills (now a cultural, experiential and retail hub), brings Mother Nature to the location’s industrial landscape. Becca: On my site visit, I noticed how the new development warped harmoniously around the preserved structures, which links with the collaborative theme within our previous murals of contrasting cityscapes layered with overgrown nature. I took inspiration from the architecture, specifically the notorious green pillars, and incorporated our signature greenery into what looks like a paradox between a thriving environment and an abandoned work place to evoke feelings of sentimentality – ultimately highlighting the history and heritage of the building.

What was the process of painting this mural like?

Carol: It was an interesting experience painting in Tsuen Wan; my mum grew up there, so it was nice exploring her childhood jaunts on our breaks – like trying her favourite noodles in the Heung Che Street Market. It’s great that some of these places are still around. There was also a really sweet moment when a stranger passing by gave us two cold drinks he bought from 7-11 because it was such a hot and sunny day.

What has been the public reaction to your piece?

Becca: We’re honestly surprised by how popular this one has been – we didn’t expect this mural to be the background of so many Tinder profile photos! It’s always flattering when a piece is well received, and interesting seeing how different our piece can look depending on what filter was used. Where in Hong Kong do you like to go for inspiration?

Carol: There’s a lot of plants and botanicals in our work, and Hong Kong is the perfect place to go hiking and get lost in the mountains for some inspiration. Becca lives in Sai Kung, and I used to live on Lamma Island, so nature was literally on our respective doorsteps. It’s also fun going to the Prince Edward Flower Market to look for special, seasonal or rare plants we wouldn’t find while hiking – we’re both obsessed with house plants (surprise, surprise!), so it doubles as a fun shopping day – although both of us are running out of space for plants at home… 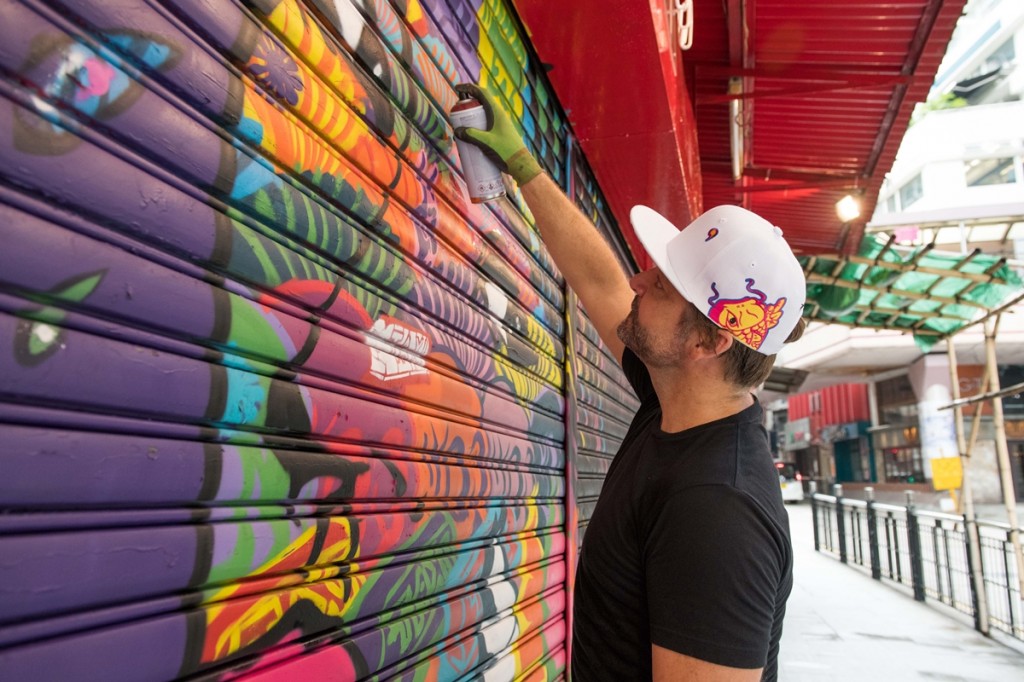 Known for his old-school graffiti aesthetic and onstage antics, British-born contemporary urban artist and designer Szabotage uses his street art to capture the essence of the city, fusing inspiration from both the east and west to create something uniquely “Hong Kong”. Having been commissioned by the likes of Louis Vuitton, Pret A Manger, Ritz Carlton and more, his pieces are popular as much for their bright colours and popular cultural references, as they are for Szabotage’s exploration of the relationship between urban architecture and their communities.

Proving that culture isn’t a solely cosmopolitan affair, his iconic panther mural is set against the backdrop of a quiet residential village in the Hong Kong countryside. 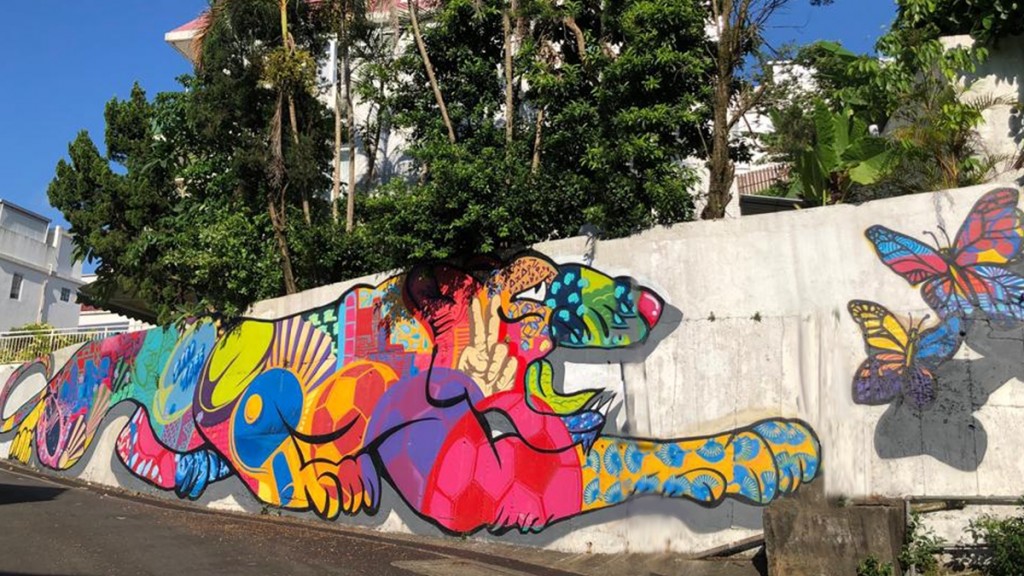 I first painted a large mural of a lobster on the wall of my house, as the area is called Lobster Bay.  This had amazing feedback from our local community, and subsequently led to a request from my neighbours that I paint their wall.  This provided the opportunity for a second large scale mural in the village, and that’s how the Village Cat came about.

The inspiration behind this mural is about the family and their interests, including their appreciation of cats.  I added sporty elements to tie in with their love of all things active, including a stencil of the family paddle boarding together. The addition of the butterflies pays homage to the wonderful wildlife that surrounds us in Clearwater Bay. 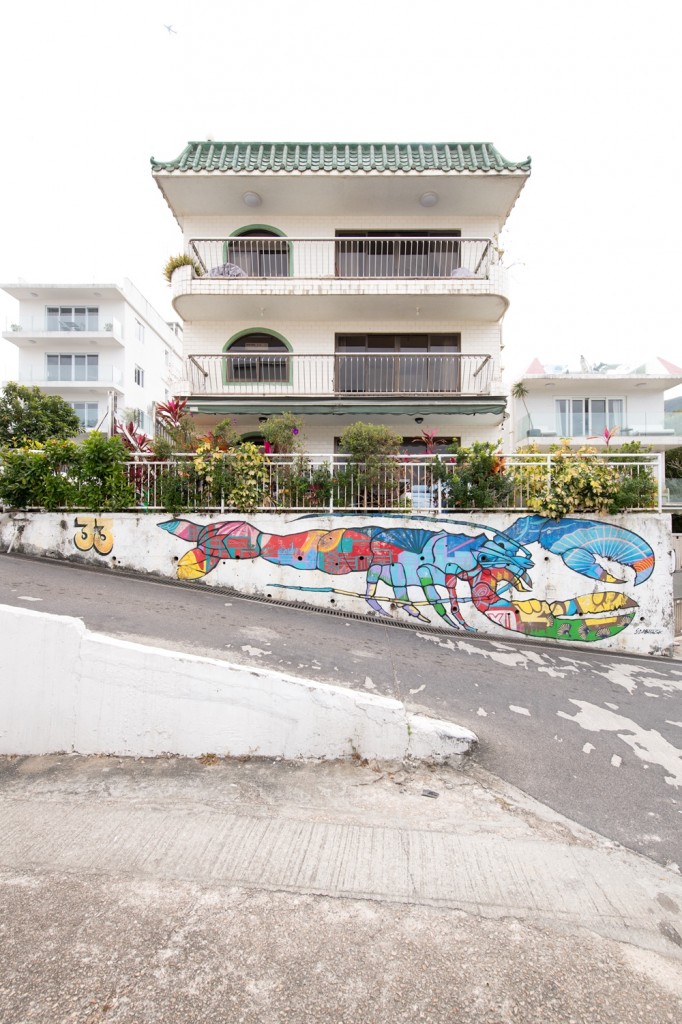 What was the process of painting this mural like?

During the painting process, many of the villagers stopped to chat to me.  The satisfying part about creating a mural on the street is the ability to interact with people whilst you’re painting, and getting immediate reactions and responses to your work.

I remember an instance when a young girl came and chatted to me. She then went home and painted a picture for me. I was really chuffed that she had felt inspired. If my artwork encourages people to draw more, then that’s a huge achievement for me.

Works like the Village Cat pay homage to Hong Kong, so it means a lot when people here appreciate what I’m creating.  It’s also inspiring when people outside of the Hong Kong community, with no personal connection to the piece, appreciate the artwork too. 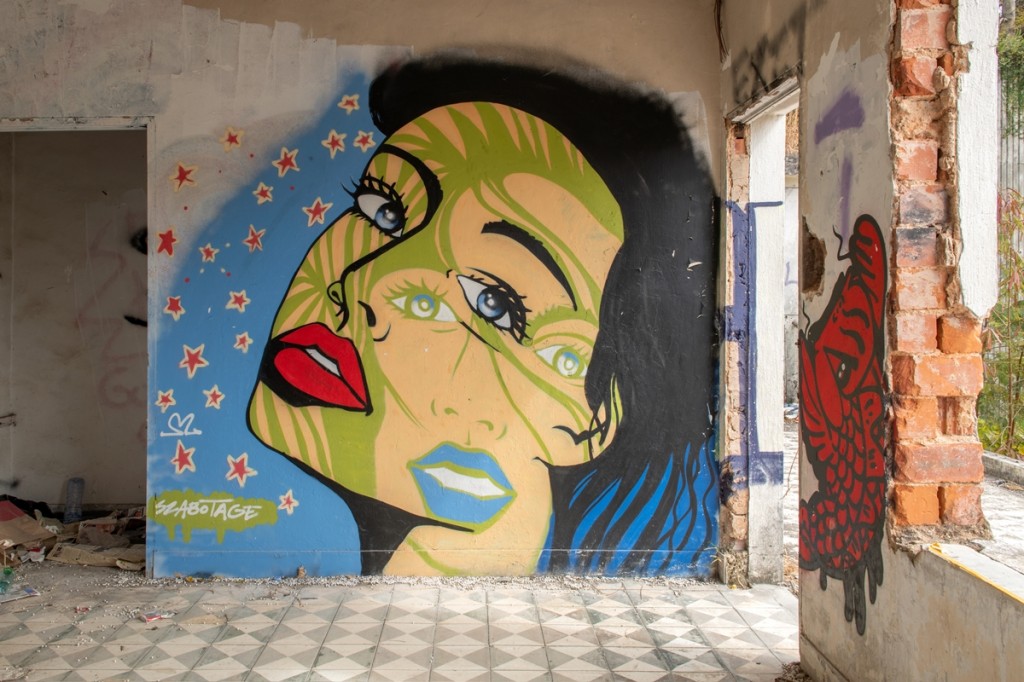 What is your favourite street or neighbourhood for street art in Hong Kong?

Sai Ying Pun has to be one of my favourite spots for street art in Hong Kong.  With a mix of old Hong Kong and new developments, there’s a real variety of street art styles and pieces.

A number of streets around Sai Ying Pun have been transformed into a multi-coloured canvas, with vibrant murals by both local and international artists.  Galleries have also exhibited street artists, and there’s a real international feel, with famous artists leaving their mark here when passing through Hong Kong.

Sai Ying Pun is also home to many of my notorious Koi Fish tags. Some have even been added to by other artists, with one even painting cats alongside for a cheeky touch of humour.