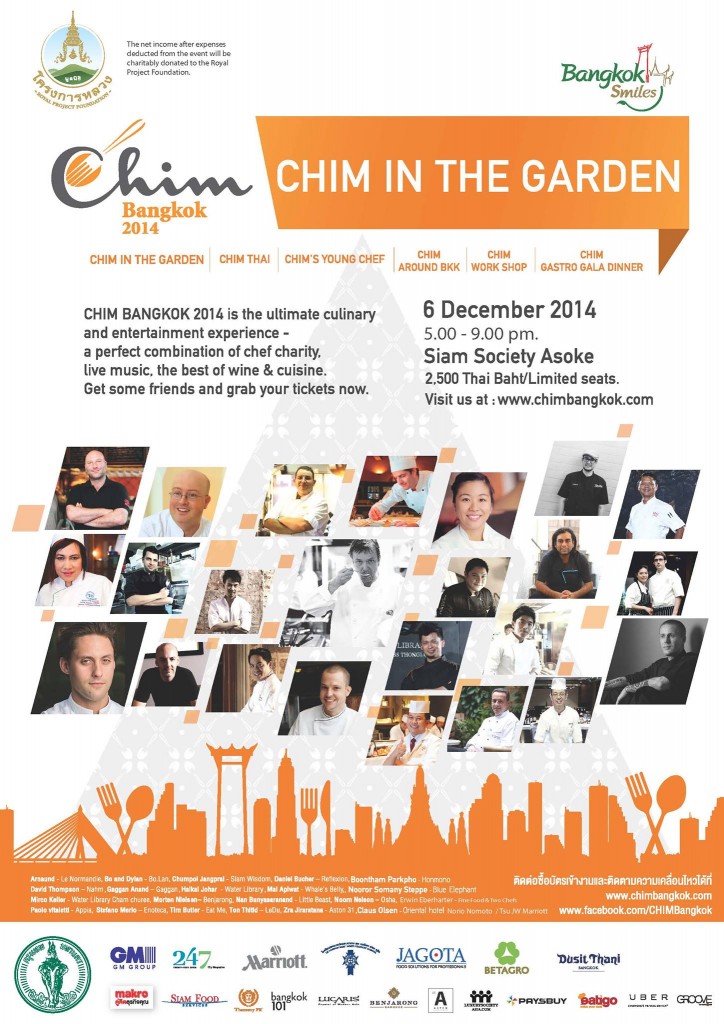 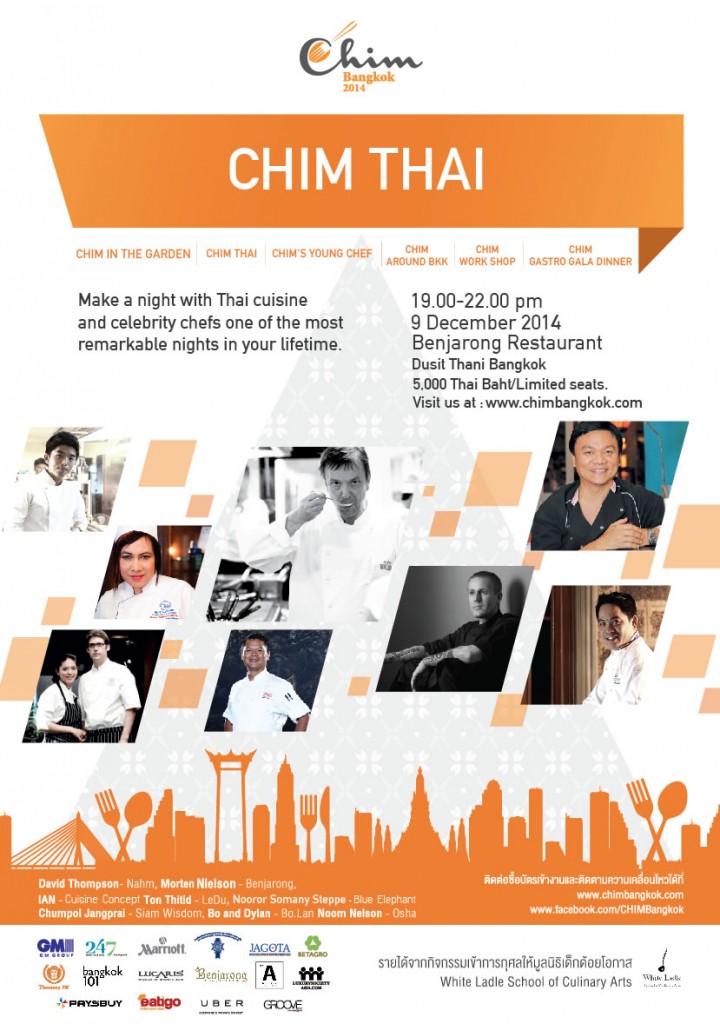 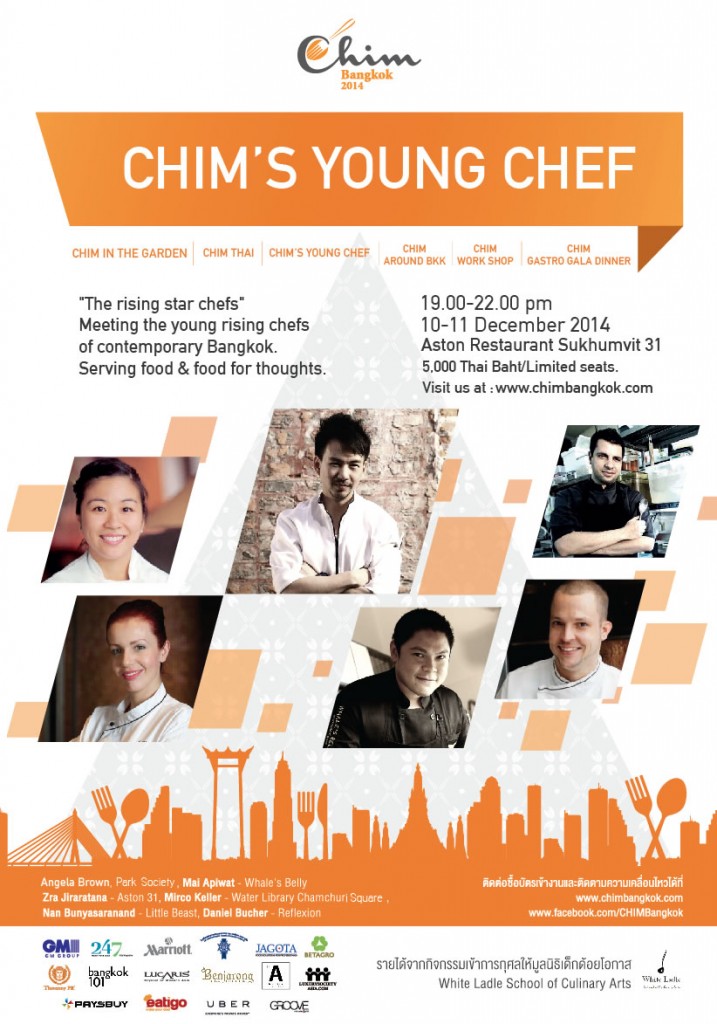 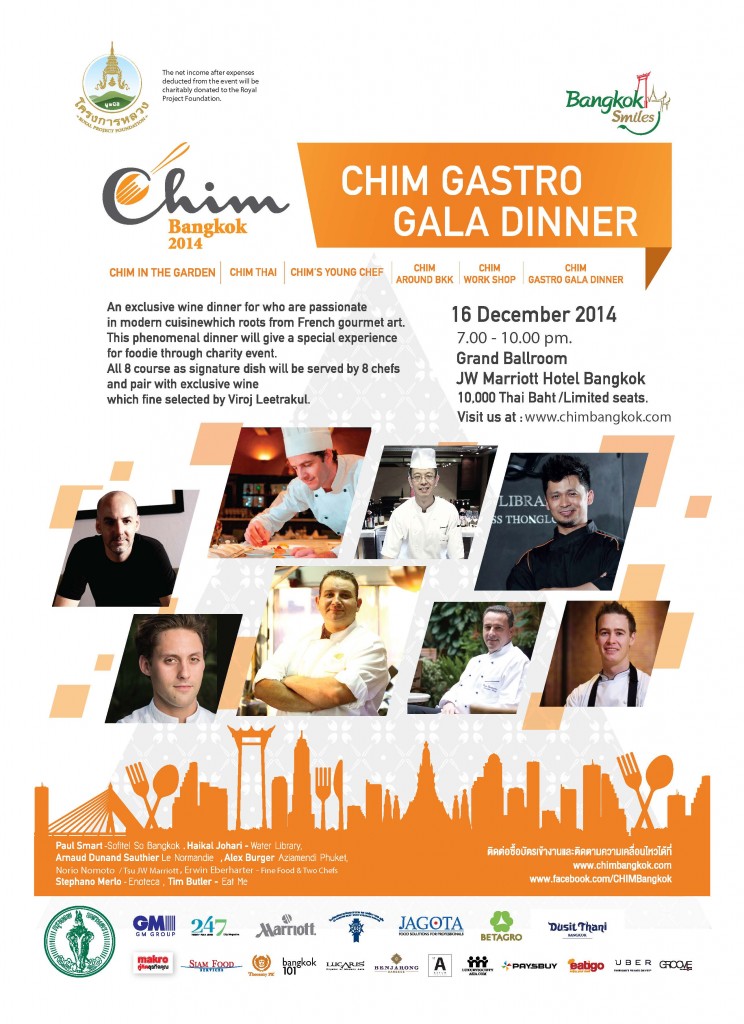 Following the success of Bangkok Restaurant Charity Week 2013, Thailand’s leading chefs once again, team up to create a new culinary phenomenon in the country’s growing gourmet scene. To ensure that the upcoming event will be bigger than ever, ‘GM Multimedia’ has joined the team of organizers, while the event has been renamed to ‘ CHIM BANGKOK 2014′. The event is targeted to be Thailand’s biggest gourmet to attract foodies from around the world.

In order to underline Thailand’s positioning as the kitchen of the world, the event has not only changed its name to represent Thainess, but also focusing on Thai chefs and restaurants. The organizers, supporters and chefs also come up with activities to ensure world-class dining experience. This year’s event features both regular and new supporters e.g. GM Group, Marriott Thailand, JAGOTA, Le Cordon Bleu Dusit, BETAGRO, as well as Theoxeny PR, Bangkok 101, Lucaris, Groove, Luxurysocietyasia.com, Eatigo, DusitThani Group and ASTON 31.

The highlight of this year’s CHIM BANGKOK 2014’ includes CHIM In The Garden, a long-table, al fresco style dinner, surrounded by nature and jazz music, while guests will enjoy Gourmet-Bite dining from more than 20 leading chefs. The event will be held at Siam Society, Asoke. 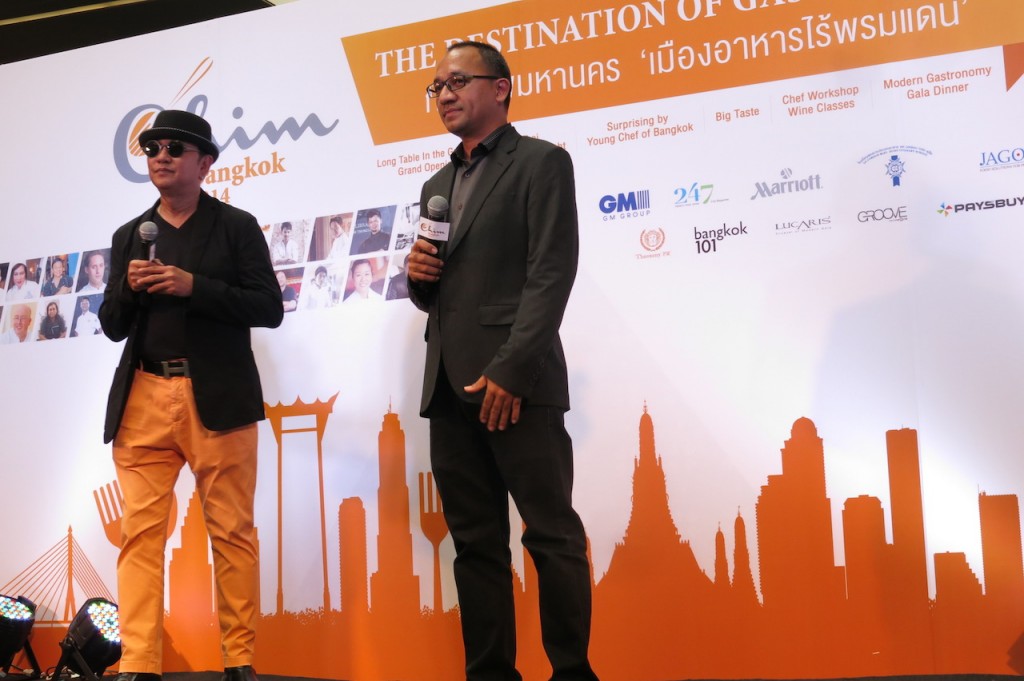 Mr. Narong Roojum, former editor of Thailand Restaurant News and organizer of Restaurant Charity Week 2013, revealed that the transformation of the dinner charity has been carefully created from his 14 years of experience as a journalist in food service trade and as key driver in organizing the event for the third year. The event has evolved each year through collaboration with the country’s leading chefs and major supporters from the food service sector, aiming to raise par for Thai food and restaurant sectors, being top choice for international diners, especially in Asia region, strengthen relationship with professionals in the food industry, as well as giving back to the society.

“I see myself as just a coordinator in this event, getting all parties together. The success would not happen without the contribution of all the chefs, participating restaurant owners who do not even charge their fees like Chef David Thompson, Chef Gaggan Anand, Chef Pongtawat “Ian” Chalermkittichai and others. If you see their schedules, you would know how hard it is for them to find the time to work together for this event. Another crucial force is our sponsors. This year, we are still supported by JAGOTA, gourmet food ingredient supplier for leading restaurants in Thailand. The company supports all ingredients used throughout CHIM Bangkok event. The company’s executives see the possibility of what can happen at this event, they even give us morale support, knowing organizing such event is not easy and to get good result takes time. 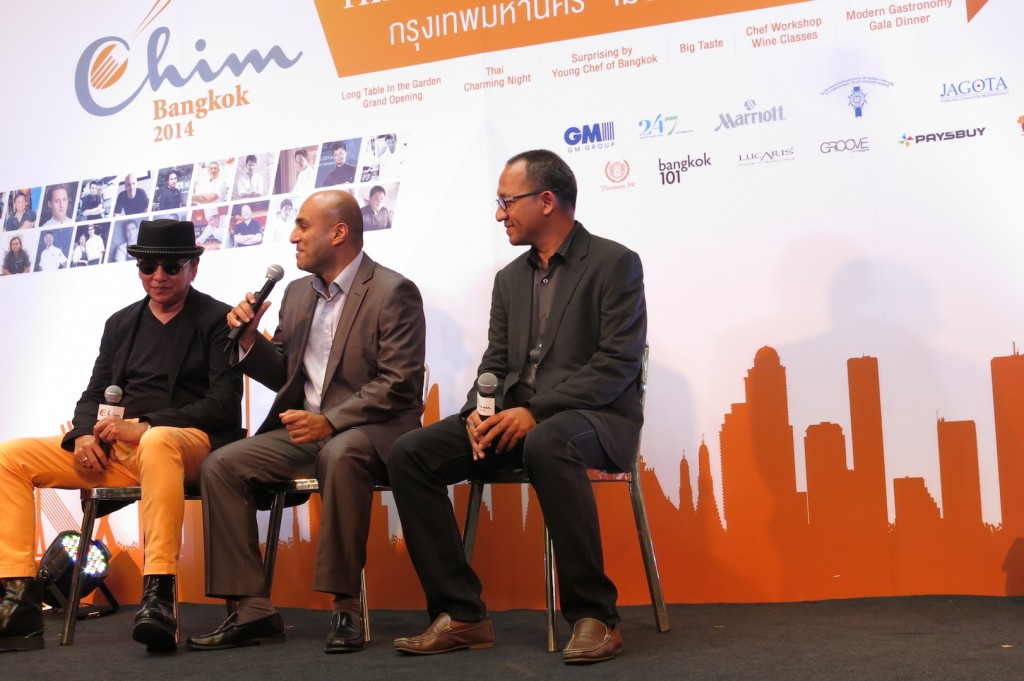 “I am also very excited that this year, GM Multimedia, is one of our supporters. With the power of the media giant and its quality professionals, we know that we can elevate this event to the Asian level as planned.”

Mr. Gopal Jagota, Jagota Brothers Trading Co. Ltd.’s Business Development Manager said about the company’s decision to support the charity event that he is personally one o fthe biggest foodies and has always been interested in seeking good restaurants, as well as working closely with leading chefs in Thailand; he also got the chance to travel to many world-class gourmet events throughout the world. He has seen the potential of gourmet scene in Thailand, especially the capability of Thai chefs.

“I have the chance to work with several chefs and I can tell you each of them is in the international level. When I attend food event overseas, and get the chance to meet with international chefs. I often ask myself and people around me why we do not have such the opportunity in Thailand despite the growing sophistication in consumers’ dining lifestyle. Seeing Mr. Narong’s determination to work on the event – charitable event, I agree to give my whole support to the project. As one of the leading supplier in gourmet ingredients from around the world, we are ready. I personally believe that CHIM Bangkok will be success that will increase Thailand’s credibility in the gastronomy scene.”

“Approached by Mr. Narong about the Restaurant Charity Week, I was very excited to know that someone is organizing it in Thailand. This type of events take place very often overseas, where the drinking and dining lifestyle have been highly developed. Thailand is not yet familiar with it, but charitable aspect of the event is a key mechanism that help facilitate the organizing of the event; otherwise, the event might be impossible to organize. Just think about it, the fee of each chef is so expensive, and when they are all gathered at this particular event, I know there will be a lot of people ready to support it. I am more than happy to be a part of this event, seeing from the success last year.

“For this year, we have discussed about the format of the activities, there are some potential to develop it to another level. Thailand is one of the world’s main food resources. We have so many exported ingredients, especially Thai herbs that give Thai culinary its uniqueness, as well as being world famous. As we are entering the ASEAN Economic Community (AEC), I believe Thailand can be the hub for food and dining, just like other sectors. Today, we have seen that many foreign chefs have been settling down in Thailand and among the six best restaurants in Asia, two of those are Nahm and Gaggan, our own world-class restaurants.

“One of Thailand’s charms is the street food. Foreign tourists are drawn to it. I think if we can develop gastro food so that it can be enjoyed by the mass. Street food vendors can use a lot of knowledge and experience from gastro dining to improve the quality of street food.

“We are determined to push forward CHIM Bangkok as one of the most anticipated event for foodies. Of course, we will need more support to make that happen. GM Group has the policy to give back to society, along with growing our business. So, we are ready to support the event, especially in the area of media sponsorship, which is our strength. I would like to use this opportunity to encourage to help build Bangkok as the Destination of Gastronomy.

“Moreover, we also set up a charitable organization, specifically for CHIM Bangkok, which is White Ladle. It will be an institute to help groom professionals in food service from cooking, wine, services, and management. The teachers will be the chefs and professors in the field. We also plan to open a restaurants where our students can work. We will compile popular recipes from famous chefs and made by their students. Everybody seems very interested in the concept. However, not that everyone can study in the institute, as we will select students who are underprivileged like orphans from the three southernmost provinces, youths from emergency shelters for example. Preliminarily, Bangkok Metropolitan Administration (BMA) has helped filter the students.” 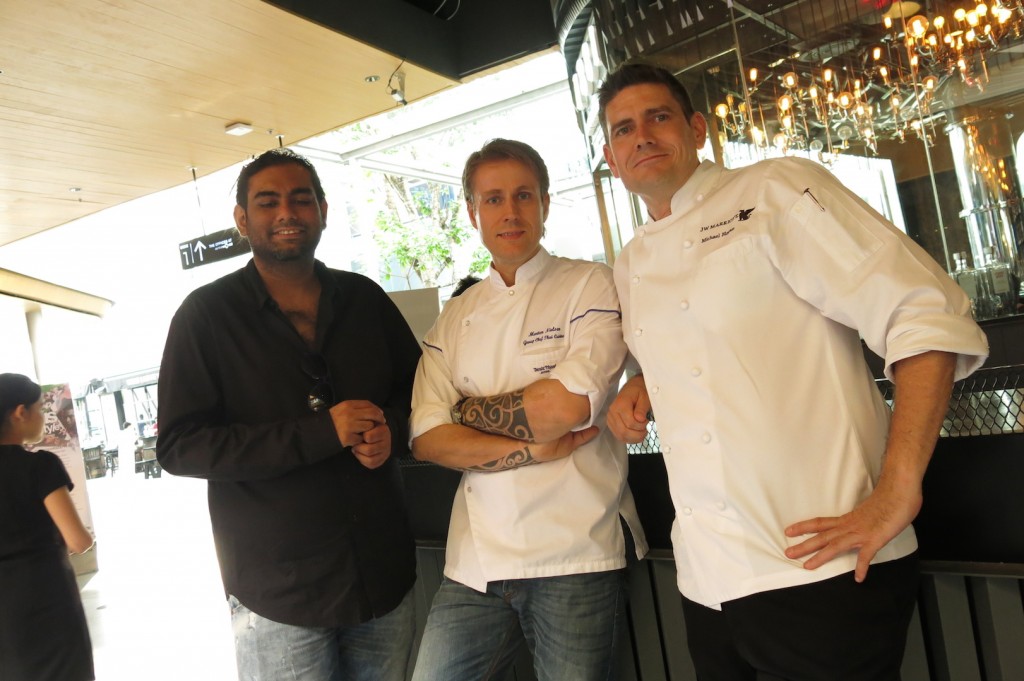 6 December 2014 – CHIM IN THE GARDEN: Dinner in the garden in Gourmet Bite style, surrounded by the nature under big white marquee with a long table stretched across the decorated venue. Celebrity chefs will be there to make special menus that you might not get the chance to taste even at their own restaurants. Enjoy the music from live jazz band. Wine lovers can also add additional selection in special price. The dining experience is limited to only 250 diners for THB2,500 each. The cost includes food and drink throughout the activity (excluding wine, which is available upon selection). 10-11 December 2014 – CHIM’s YOUNG CHEF: New generation of celebrity chefs will team up to make this dinner most memorable. Since they are also living the lifestyle of new generation, the chefs understand how to create the ultimate experience for modern diners. The seven-course menu with wine pairing will be created by Zra Jiraratana / Aston 31, Mirco Keller / WL Chamchuri, Nan Bunyasaranand / Little Beast, Daniel Bucher / Reflexion, Angela Brown / Park Society and Mai Apirawit / Whale’s Belly. The activity will take place at ASTON 31. The ticket costs THB5,000 and is limited to 60 guests only. 6-16 December 2014 – CHIM AROUND BANGKOK: Throughout the two-week event, diners will enjoy special set promotion at leading restaurants. Get the chance to taste signature dishes in an affordable price. For more information, please visit www.eatigo.com.

17 December 2014 – ProSom2014: The competition to find Thailand’s top sommelier will take place for the second time this year. Contestants will go through tough challenges, just like international arena in order to show their knowledge and skills. The application for this activity is free. The activity is co-organized by Association of Thailand Sommeliers (ATS).

17 December 2014 – Bangkok Top 20 Best Restaurant 2014: To complete the grand event, Bangkok’s top chefs and restaurants for 2014 will be named based on votes by 50 committee and fine dining gurus, consisted of 20 leading chefs, 15 food and drink suppliers, 15 media and sommeliers. The activity will take place at JW Marriott Bangkok.

Be a part of this gastronomy experience and help prove that Bangkok is … the Destination of Gastronomy. 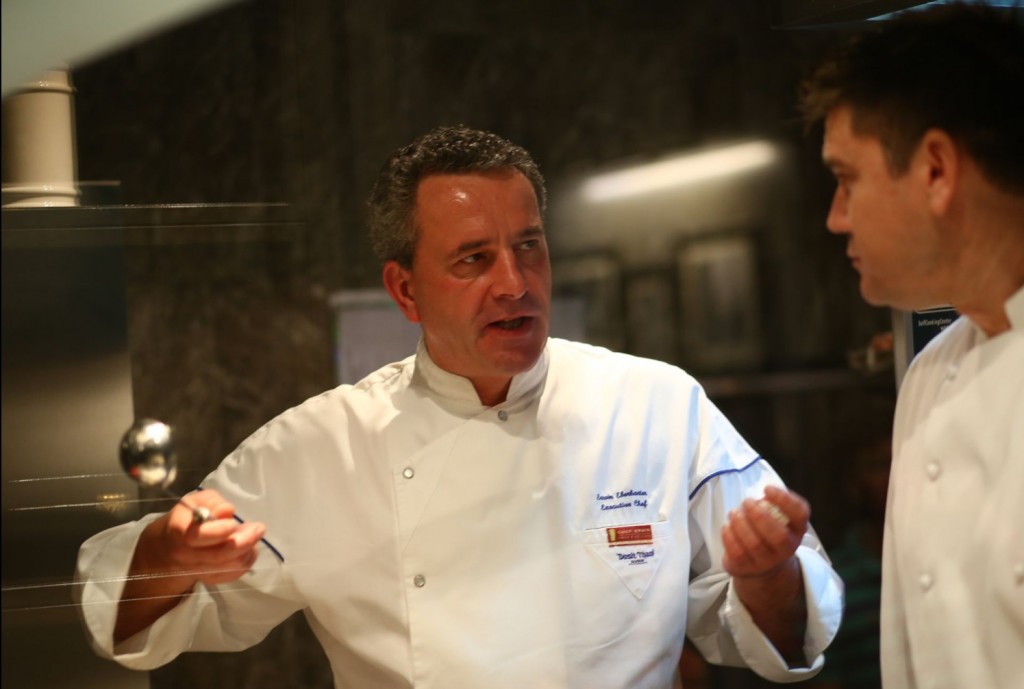 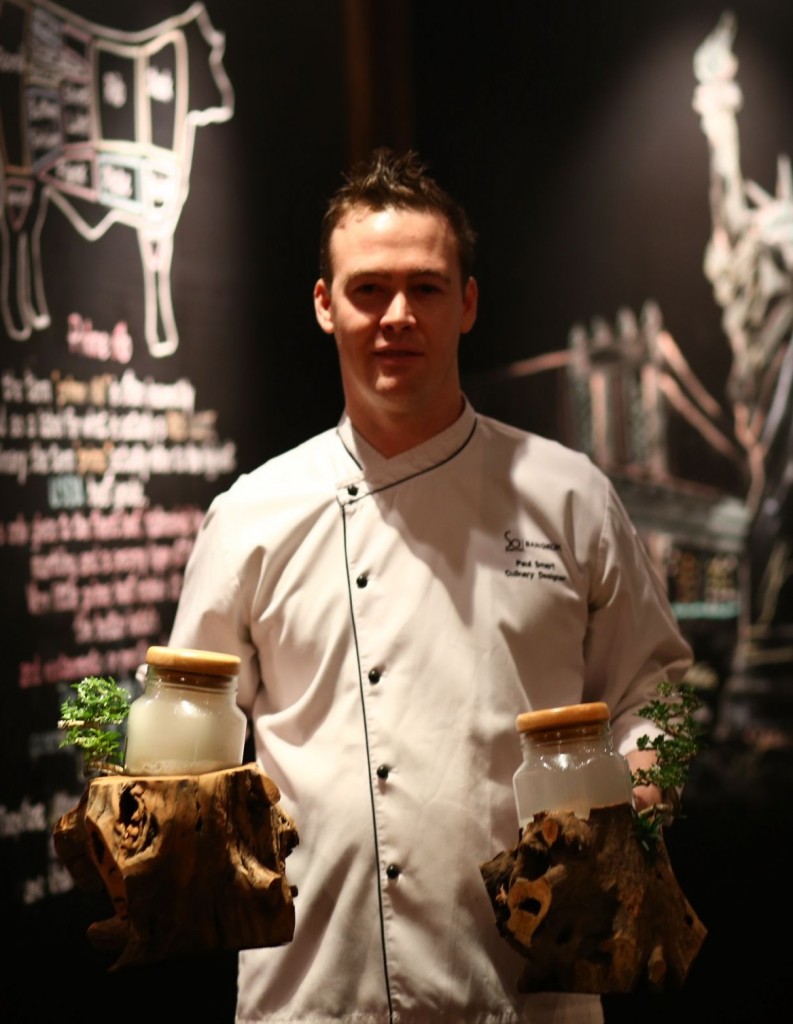