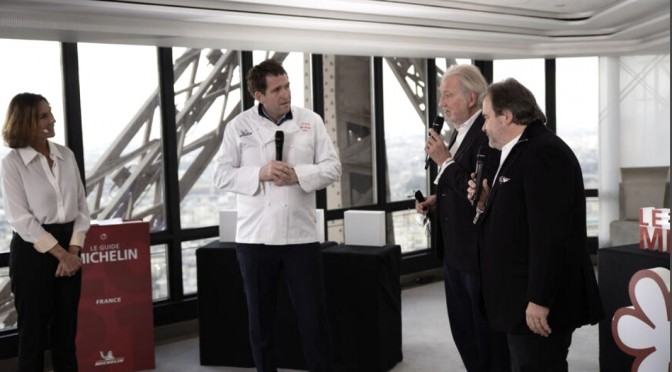 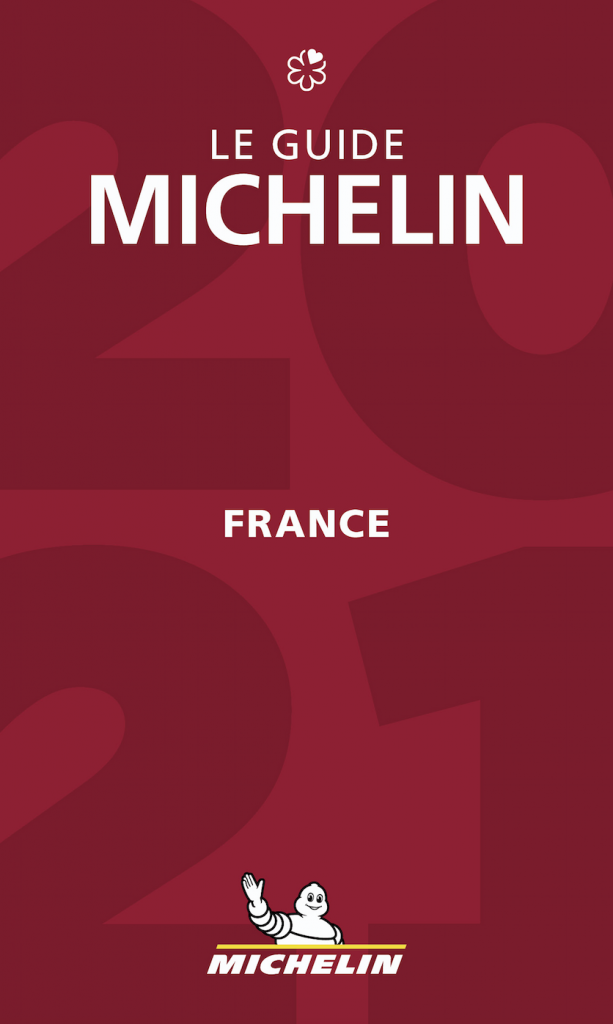 2021 MICHELIN Guide: Despite the ongoing crisis facing restaurants, the 2021 edition of the MICHELIN Guide reaffirms the resilience, excellence and vibrancy of the French fine dining scene, with many talented young chefs coming into their own across the country
AM par Alexandre Mazzia in Marseille honored with its third Star
Another 54 restaurants earn their first Star
33 more restaurants committed to sustainable gastronomy awarded a MICHELIN Green Star

Although the restaurant industry continues to grapple with the effects of an unprecedented health crisis, Michelin remains loyal to gourmet diners and restaurants, proudly presenting the 2021 edition of the MICHELIN Guide France. 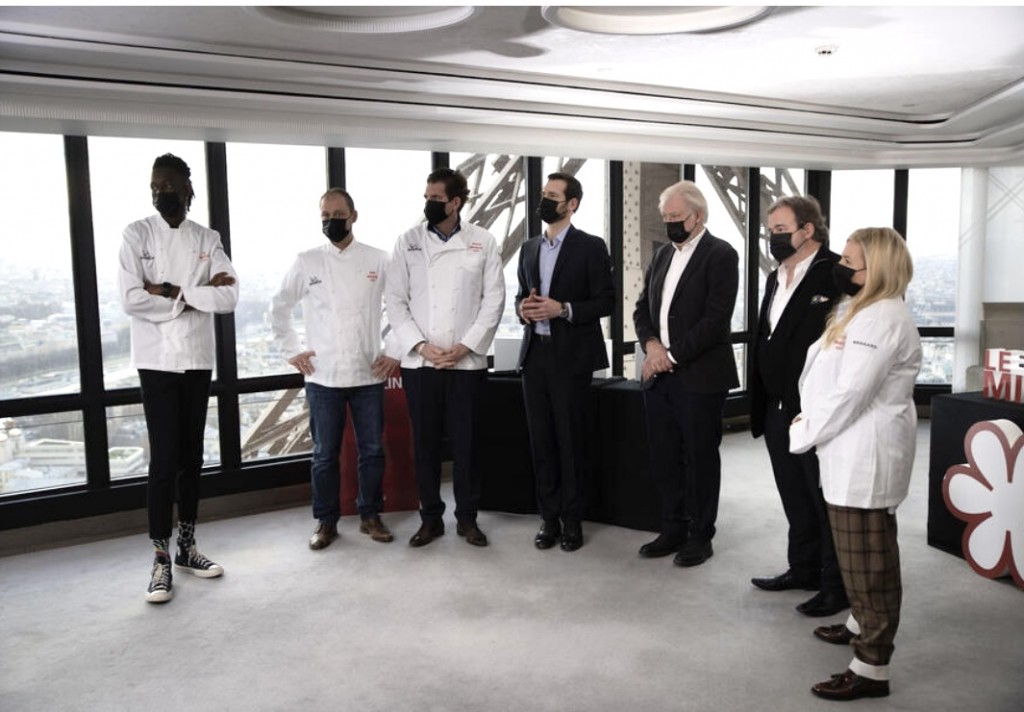 Featuring 638 starred establishments, including 57 new addresses, the 2021 Guide shows that, thanks to a wealth of both longstanding and emerging talent, the fine dining scene is still very much alive and well all over France.

For the second year, the MICHELIN Guide has awarded a MICHELIN Green Star to a selection of restaurants committed to advocating a virtuous, sustainable approach to gastronomy. The 33 restaurants singled out this year, whose efforts ring particularly true today as environmental awareness becomes more acute, continue to pave the way for a more responsible future.

“As we know, 2020 was a particularly challenging and difficult year for restaurant owners,” said Gwendal Poullennec, International Director of the MICHELIN Guides. “However, they welcomed diners whenever they could, and customers responded eagerly, demonstrating their deep fondness for fine cuisine. Our teams have been impressed by this show of solidarity and engagement. For us,  it was important to honor our longstanding commitment to diners and chefs by publishing our 2021 selection of restaurants.”

“Just as the past year impacted chefs,” he added, “our local teams also had to adapt as they prepared the 2021 edition of the Guide. Thanks to an exceptional level of commitment from our inspectors in France and some from abroad, following our time-honored methods and carrying out as many restaurant visits as usual, the teams managed to draw up a selection of restaurants that is every bit as reliable and credible as in previous years. The 2021 edition reaffirms that fine dining continues to shine brightly throughout France, lit up by wide range of talent, both familiar faces and new arrivals. We sincerely hope that our Guide will be a useful tool for the people who place their trust in us, and that it serves as an invitation to discover or rediscover the pleasure of fine cuisine while also contributing to the recovery.” 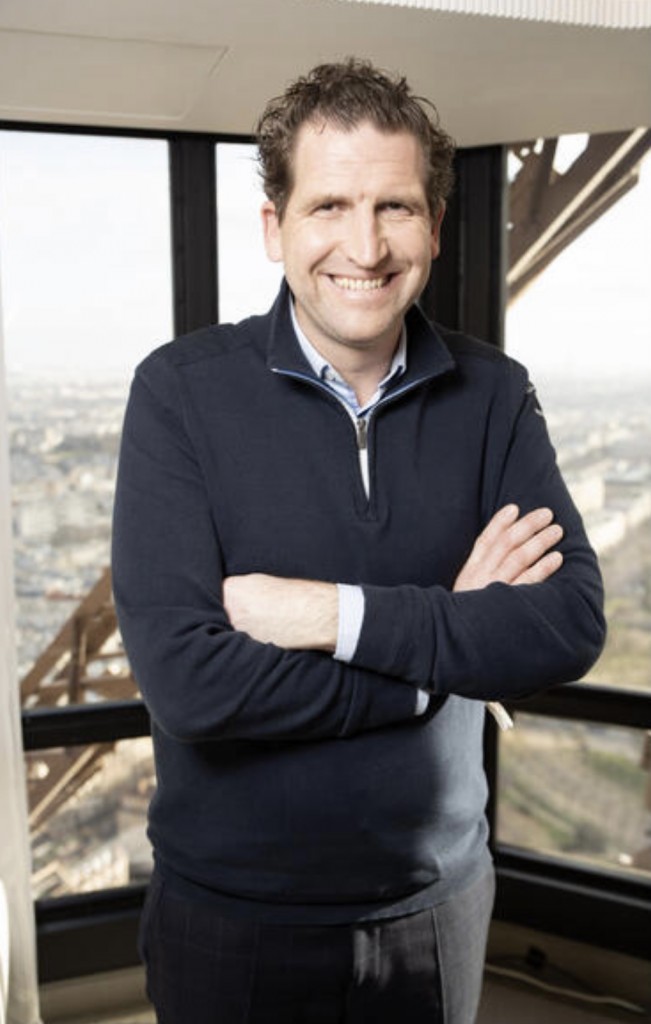 Tucked away in Marseille’s eighth arrondissement, AM par Alexandre Mazzia never fails to fascinate and stimulate our inspectors’ palates. The eponymous chef’s unique and cross-cultural cuisine, with a kaleidoscope of flavors bringing together local produce and influences from across the world, has been recognized with a third Star. Diners at AM par Alexandre Mazzia are invited on a culinary voyage like no other: the menu, composed of courses which are themselves made up of a series of small dishes, gradually evokes a culinary identity shaped by memories of a childhood spent in the Congo and echoes of an exhilarating journey through life. Alexandre Mazzia’s cuisine is ephemeral, inspired by the moment. Designed to surprise, it is reinvented each day in a kitchen that opens onto the dining space. The restaurant is home to a team of passionate, talented young chefs who prepare the cuisine like clockwork, in a silence broken only by the sounds of saucepans and stoves. 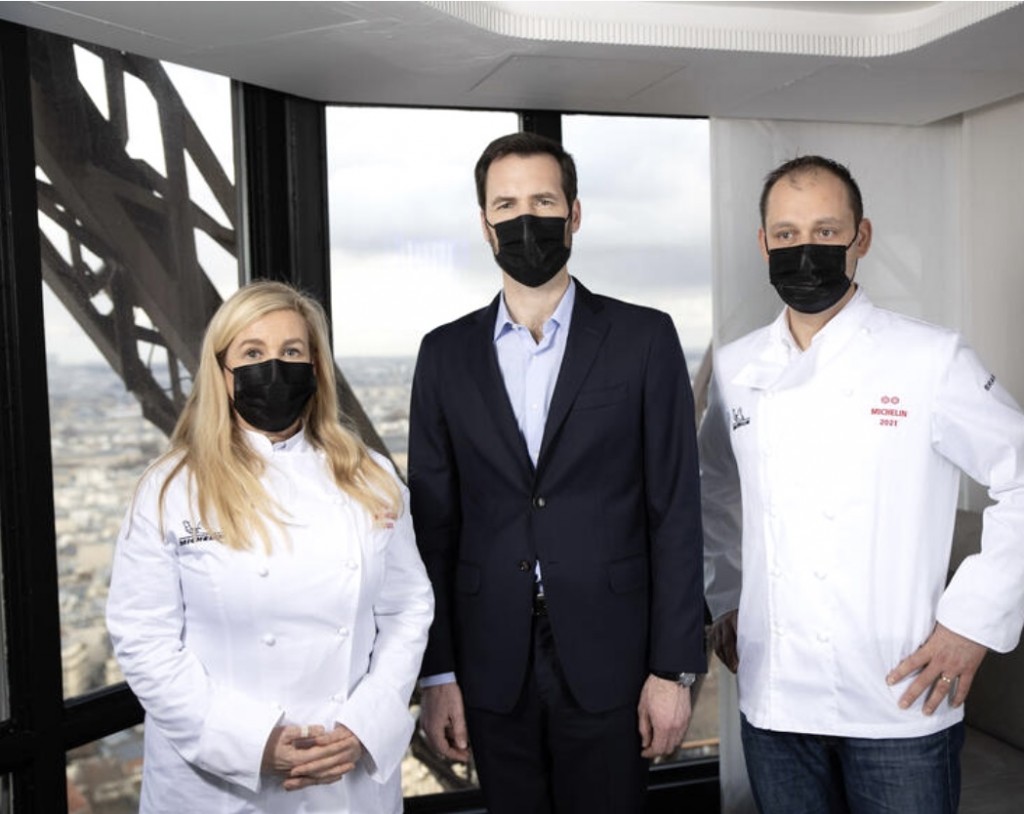 A name well known to cuisine connoisseurs, chef Hélène Darroze pays homage to her Les Landes roots and incorporates flavors from the Southwest of France into the menu at Marsan in central Paris. Within the restaurant walls, totally redesigned by Darroze two years ago, the chef combines taste, precision and modernity in dishes that take visitors on a journey through her meandering culinary background.

In Laubach, Alsace, Cédric Deckert, former sous-chef to Jean-Georges Klein at L’Arnsbourg, dreams up mouthwatering classic dishes at La Merise, partnered by his wife Christelle at the head of the service team. Sauces and jus nothing short of sublime add the finishing touches to cuisine with traditional overtones in the capable hands of a chef at the top of his game. Three years after receiving its first Star, La Merise’s adventure in gastronomic excellence is far from over.

In all four corners of France, our teams discovered no fewer than 54 new addresses whose high-quality cuisine left a strong impression. The Provence-Alpes-Côte d’Azur region came out on top, with 12 restaurants earning a Star for the first time. These include La Mère Germaine in Châteauneuf-du-Pape, where chef and pastry chef duo Camille Lacome and Agathe Richou serve up delicious dishes that live up to the history of the establishment, which has played host to the great and good of Paris as they vacation in the South of France, from Gabin to Fernandel. In Théoule-sur-Mer, our inspectors were particularly charmed by the elegant cuisine of Alain Montigny, named Meilleur Ouvrier de France in 2004, at L’Or Bleu.

In Auvergne-Rhône-Alpes, ten new restaurants were awarded their first Star. At L’Auberge du Pont in Pont-du-Château, chef Rodolphe Regnauld’s menu showcases the best products of the region in carefully thought-out dishes bringing together influences from land and sea.

Four new addresses joined the selection in Occitania, including Reflet d’Obione in Montpellier, where chef Laurent Cherchi offers flavorsome, precise creations, and Duende in Nîmes, with a menu by Pierre Gagnaire delivered by Nicolas Fontaine. On par with Occitania was the Centre-Val de Loire region, where our inspectors singled out a further four establishments, including L’Auberge Pom’Poire (formerly a Bib Gourmand restaurant) in Azay-le-Rideau, home to chef Bastien Gillet and his teams, who create dishes around fine local ingredients with remarkable precision and accuracy.

In Saint-Maximin, chef Guillaume Guibet, the youngest chef in this year’s Star selection, has recently taken over the kitchen at family restaurant Le Verbois, although his parents remain close by in front-of-house roles. The 25-year-old pays tribute to the restaurant’s Picardy roots, contrasted with influences from Asia. Diners in Western France will enjoy Guillaume Scheer’s generous cuisine at Les Plaisirs Gourmands in Schiltigheim, while over to the East, lovers of coastal, typically Breton flavors will not be disappointed by Moulin de Rosmadec in Pont-Aven, led by chef Sébastien Martinez.

Another key takeaway from the 2021 selection is the continued spread of diverse styles of cuisine across France. At ONA, opened by self-taught chef (and former archaeologist!) Claire Vallée in Arès in Arcachon Bay, for example, vegan cuisine takes center stage for the first time in a restaurant to win a Star in France. Carlos Camino brings a slice of Peru to Lyon’s fine dining scene with Miraflores, while Antonio Salvatore plays with Italian flavors at La Table d’Antonio Salvatore au Rampoldi in Monaco. In Paris, a global city where international influences converge and intertwine, Enrique Casarrubias’ Oxte flies the flag for Mexican cuisine, and Assaf Granit dreams up dishes at Shabour inspired by his native Israel and the Mediterranean.

Food lovers in Tignes looking for a thrilling, unique experience can enjoy lunch or dinner from up in the clouds. Perched 3,032 meters above sea level, Le Panoramic is a feast for the eyes and the taste buds alike, with Clément Bouvier’s cuisine similarly reaching lofty heights. 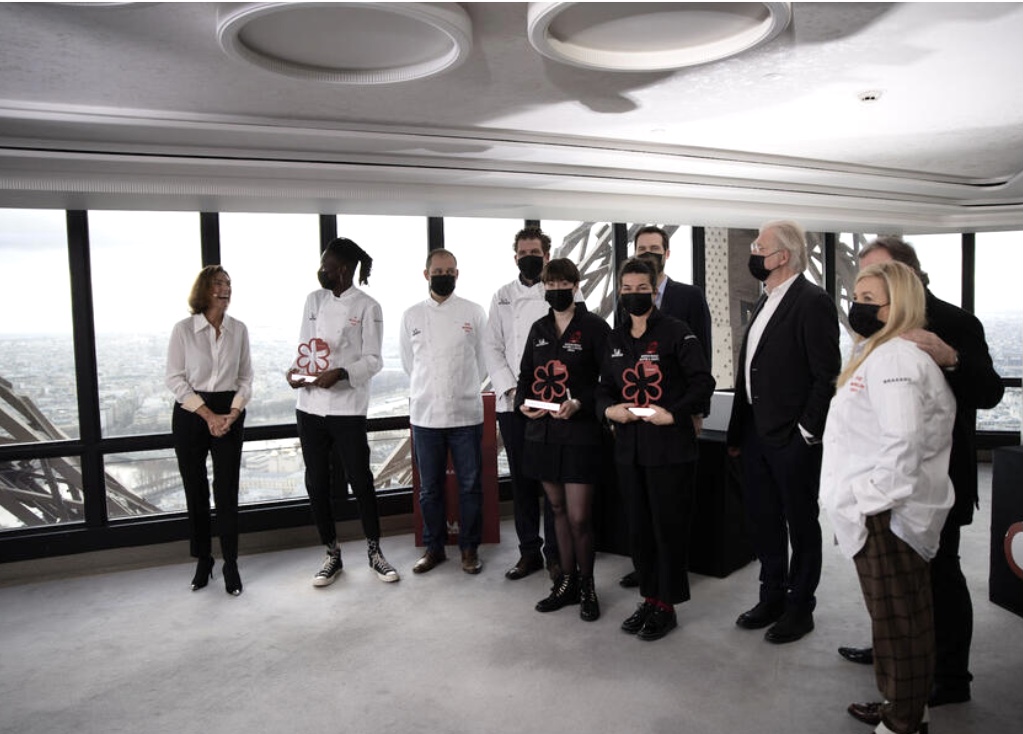 The 33 restaurants singled out for their inspiring approaches include Scratch Restaurant (MICHELIN Plate) in Bourg-en-Bresse, where Andréas Baehr and his teams strive for the utmost transparency for their customers. Food waste is kept to a minimum, ingredients are sourced locally or from sustainable and responsible farms and fisheries, and even the cleaning products used are as natural as possible.

Sébastien Rath’s Riche (MICHELIN Plate) in Alès also prides itself on local sourcing, with almost all its produce from suppliers located within 50 kilometers of the restaurant. In Rhinau, chef Alexis Albrecht grows his own produce in a vegetable garden spanning 6,000 square meters, making Au Vieux Couvent (One MICHELIN Star) self-sufficient for 80% of its ingredients. He also maintains close ties with local producers and farmers to offer a menu that respects the surrounding ecosystems. 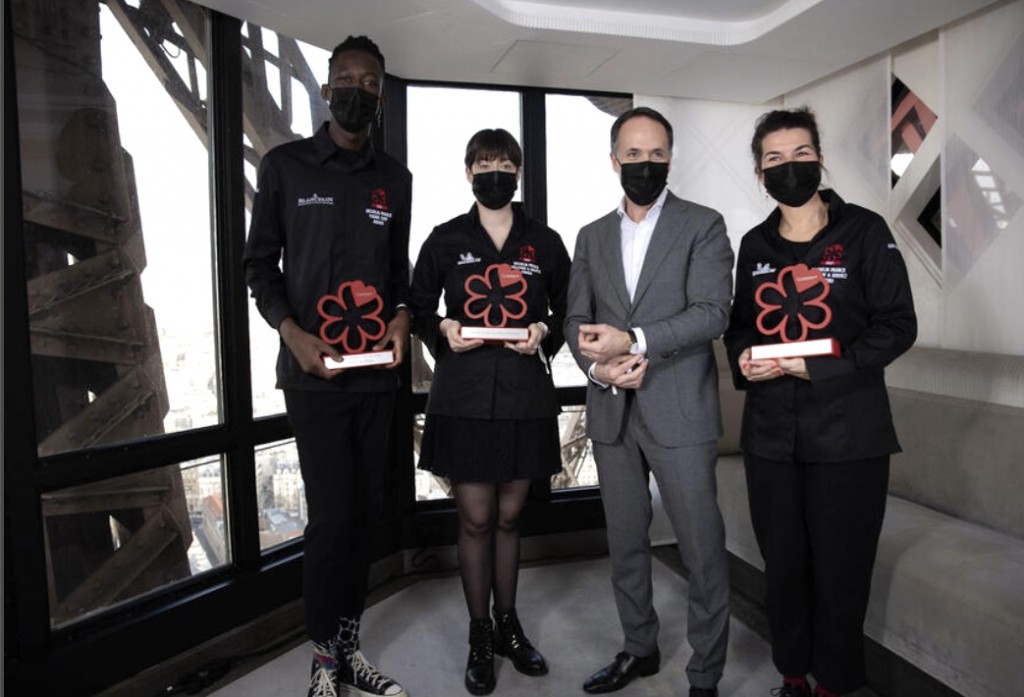 With a view to showcasing the wide range of trades in the restaurant industry, which have also been hit hard by the health crisis, the MICHELIN Guide inspectors wanted to highlight front-of-house roles, such as service and wine waiting, as well as pastry. The Welcome and Service Award this year went to Delphine Alemany of La Closerie (One MICHELIN Star) in Ansouis and Marion Denieul from Maison Tiegezh (One MICHELIN Star) in Guer. Each has her own style and approach, with customers appreciating the warmth and attentiveness of Delphine Alemany and the sophisticated, engaging and understated welcome from self-taught Marion Denieul who, after studying law, followed her heart to the dining room, serving cuisine by her husband Baptiste.

Vanessa Massé, wine waiter at Pure & V (One MICHELIN Star) in Nice, won the Wine Waiting Award. Always on hand with astute advice on a wine list made up exclusively of natural wines, Vanessa Massé is known both for her wealth of experience acquired throughout her international career and for her strong personality.

In addition, 11 pastry chefs made it into the Passion Dessert selection, drawn up by the MICHELIN Guide teams and presented in partnership with Valrhona. The distinction reflects the increasing recognition of pastry as an essential part of the fine dining experience. The 11 winners include Anne Coruble, pastry chef at L’Oiseau Blanc Peninsula in Paris (One MICHELIN Star), Simon Pacary of La Table de Franck Putelat in Carcassonne (Two MICHELIN Stars), Maëlle Bruguera from restaurant Le Art – Château de la Gaude in Aix-en-Provence (One MICHELIN Star) and Max Martin, pastry chef to Yoann Conte in Veyrier-du-Lac (Two MICHELIN Stars).

Lastly, the MICHELIN Guide inspectors decided to honor two young talented individuals with the Young Chef Award presented by Blancpain. One of the winners was 31-year-old Coline Faulquier, whose Marseille restaurant Signature also received its first Star this year. She is known for constantly designing creative, refined dishes made with exquisitely selected ingredients. The other was Mory Sacko, at the head of MoSuKe in Paris. At 28 years old, he has already made a name for himself with a highly accomplished style of cuisine combining African influences with a distinctively Japanese touch, on a foundation of French culinary techniques.

On top of the 57 restaurants to win one, two or three Stars this year, the Bib Gourmand selection is also full of new places to try. With 72 additions this year, the selection reflects the wonderful variety of restaurants offering high-quality food at an affordable price (set menu with starter, main and dessert for a maximum of €39 in Paris and €35 elsewhere in France). From the traditional or contemporary market cuisine served at Cartouches in Toulouse, Les Petits Parisiens in Paris and La Loge Bertin in Manosque to the Asian dishes on offer at Double Dragon, Lai’Tcha and Brigade du Tigre in Paris, the selection is increasingly diverse from one year to the next. In this category of restaurants, our teams also noticed a growing trend towards more environmentally friendly cuisine, with more and more chefs turning to small local producers, sustainable and responsible farms and fisheries and biodynamic winemakers to create dishes that rise to the challenges of today and tomorrow without compromising on taste.

The 2021 MICHELIN Guide France in figures:

Michelin, the leading mobility company, is dedicated to enhancing its clients’ mobility, sustainably; designing and distributing the most suitable tires, services and solutions for its clients’ needs; providing digital services, maps and guides to help enrich trips and travels and make them unique experiences; and developing high-technology materials that serve a variety of industries. Headquartered in Clermont-Ferrand, France, Michelin is present in 170 countries, has more than 127,000 employees and operates 69 tire production facilities which together produced around 200 million tires in 2019. (www.michelin.com)