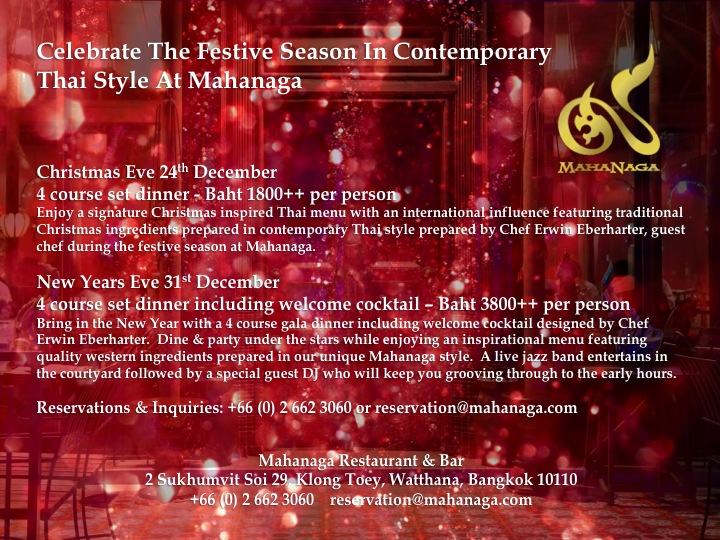 New Years Eve 31st December
4 course set dinner including welcome cocktail – Baht 3800++ per person
Bring in the new year with a 4 course gala dinner including welcome cocktail designed by chef Chef Erwin Eberharter. Dine & party under the stars while enjoying an inspirational menu featuring quality western ingredients prepared and plated in our unique Mahanaga style. A live jazz band entertains in the courtyard followed by a special guest DJ who will keep you grooving through to the early hours.

Mahanaga Restaurant & Bar serves modern Thai cuisine, fresh and bursting with flavor prepared using only the freshest, high quality local and international ingredients. Offering the very best of Thai hospitality in an outstandingly designed atmosphere featuring 2 dining pavillions, an indoor and outdoor bar and a romantic outdoor courtyard, Mahanaga is perfect venue for an intimate dinner for two or a large group party. Located in Sukhumvit 29, Mahanaga has been one of Bangkok’s most favourite Thai restaurants for the past 13 years. 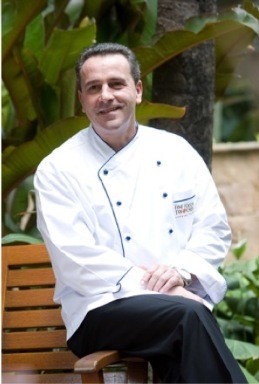 After 15 years in Bangkok as an award—winning chef, Erwin Eberharter is proud to present his new culinary adventure — Fine Food & Two Chefs. The idea behind the company is driven by a simple desire: to bring restaurant quality food into the home. His ranges of chilled, ready—to—eat meals have a focus on absolute quality. By combining the finest flavours with the freshest ingredients and using traditional cooking methods. Chef Erwin is setting a new standard in premium home—cooked meals, ready—to—eat.

From an early age, Erwin had a passion for cooking and dreamt of becoming a chef in the world’s top restaurants. His culinary career began as an apprentice cook in his home country of Austria. From there, he spent 5 years

As his status grew, Erwin went on to become Executive Chef at a series of prestigious hotels in South Africa and Asia before joining Dusit Thani Bangkok in 2000. He was later promoted to Corporate Executive Chef for Dusit International with a portfolio of 20 hotels worldwide. His experience was instrumental in developing a series of new dining concepts, including the creation of the hotel’s sophisticated Italian restaurant, il cielo. His eyes for detail and culinary creativity have also been relied upon to help establish new ventures including the Pourcel Brothers highly—regarded French restaurant, D’Sens. Along the way, Chef Erwin has also received numerous awards, including HAPA Chef of the year, Platinum winner, etc.