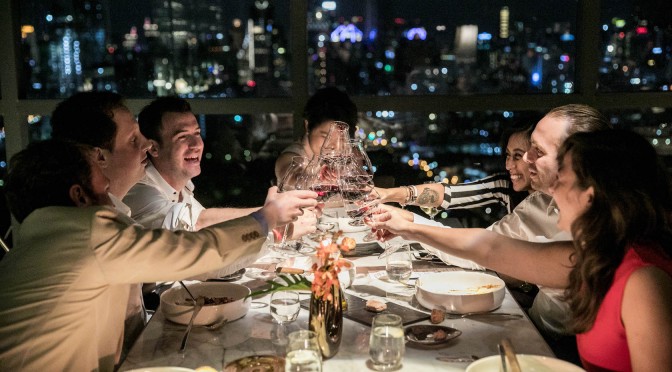 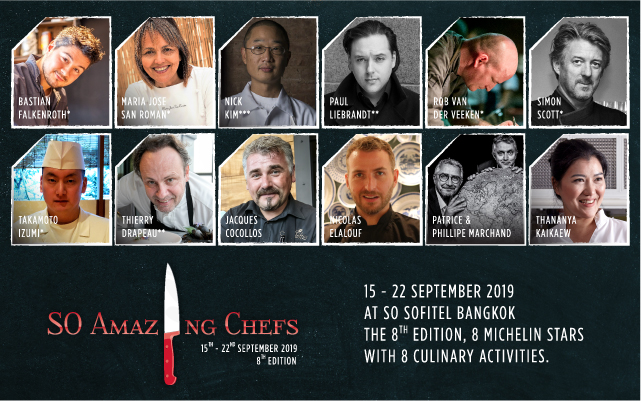 THE 8TH SO AMAZING CHEFS 2019
A TASTE OF THE WORLD
WITH PALETTE ROCKING EXPERIENCES
SO Sofitel Bangkok turns the city on with the most anticipated 8-day long culinary event gathering 8 Michelin-starred chefs to cook a storm at its dynamic dining spaces.

Get ready for big, bold flavors. Classic yet creative recipes. Endlessly delicious experiences. From 15th September till 22nd September 2019, SO Sofitel Bangkok brings together the SO AMAZING CHEFS 2019 a brand-new league of renowned chefs and culinary maestros representing the 8th Edition, this year with 8 Michelin-starred chefs plus 8 key activities. Epicures of the city are not only invited to indulge in a gastronomic adventure at SO/ Bangkok’s dining hubs but also witness an intense two-day chef Culinary Showdown.

“Answering to all foodies, SO AMAZING CHEFS 2019 will be a perfect choice where all experiences included with finest chefs handily picked for each exclusive event hosted at SO Sofitel Bangkok. This year, with its 8th Edition, we spice up the fun with new cooking class, weekend Michelin dinners, fusion Dim-Sum, traditional Kaiseki and two-day event of the Culinary Showdown. We hope you are SO ready to feel amazed and I cannot be more proud of the role SO Sofitel Bangkok has played in this city’s evolution.” said Jean-Francois Brun, SO GM of SO Sofitel Bangkok.

The 8 Michelin-starred chefs plus 8 chef maestros in total highlighting this year’s 8-Day culinary spectacle hails from more corners of the world than ever before, with each chef bringing their own unique flairs and cultural influences.

Begin the first day on Sunday 15th September 2019 at MIXO, THE LOVE OF OYSTER, with Oyster Shucker, Chef Jacques Cocollos from the world-famous oyster cultivation area Marennes-Oléron which is located on the coast of the French region. Sip & Shuck and enjoy the best Majestic oysters and pouring the bubbly in the glass. Sip up and drink up we say!

New events this year included THE ART OF BAKING, on Monday 16th and Friday 20th September 2019 at Gaggenau kitchen at MIXO, with only female from Iron Chef Thailand, Chef Thananya Kaikaew joining hands with Chef Piti Saengmanee, the Hotel’s Executive Sweets & Savoury Chef teaching how-to-bake signature “Soufflé” from Michelin’s guide, Soufflé and Me restaurant, and favourite Chocolate Lava cake with recipes to be made at home.

Follow by the return of Chef Nicolas Elalouf of Man Mo will throw together an exciting THE HOUSE OF DIM SUM, with one-night-only dining experience. Not like others, using the Gaggenau kitchen at MIXO, Chef Nicolas brings in fusing European ingredients into authentic Chinese creation, handcrafted and delicious in one bite. Over at Park Society restaurant, we fly in 1 Michelin-starred chef Takatomo Izumi of top foodies bucket list, Jiki Miyazawa in Kyoto, offering THE NIGHT OF KAISEKI, first time ever in Thailand with a series of exquisite Japanese traditional dishes matched with wine or sake. Both events will be held on Tuesday 17th September 2019 from 7pm onwards, now you have to make a choice!

With our highlight event is SO popular, we double up the fun with 2-Day SO AMAZING CHEFS, The Culinary Showdown on Wednesday 18th and Thursday 19th September 2019 at Ballroom. Total of 16 highly-rated chefs will go knife-to-knife in a two-day competitor. 75-minute will be given with secret ingredients to be revealed, working as a team, all chefs to do creative a cook-off showdown. Professional judges and industry shakers will select the winning chefs based on presentation and taste of their innovative creations. A lot of heat yet with a lot of fun we can assure you that!

And it’s time for the fame for the return of CHEESE@SO, THE SO AMAZING CHEFS EDITION with its cheese-making savoir-faire, Les Frères Marchand, one of the oldest food artisans in Eastern France. MIXO is about to get upgraded by these handcrafted cheeses as we bring back the world’s famous cheese mongers, Patrice and Phillipe Marchand, imported their own cheese making as Nutty vintage comté, the creamiest aged parmesan reggiano, fruity époisses de Bourgogne matured in white Burgundy wine, Normandy camembert with a rich tang and so much more. For one-night-only on Friday, September 20th 2019, cheese connoisseurs will get to please their discerning palate with these rare cheeses. As always, fine wine will be on pour for those who’d like to ease into the evening as they savor enchanting bonne bouche.

For Three exclusive nights from 16th till 22nd September 2019, the eight culinary chefs will craft glorious cuisines and present it in total of eight-course at Park Society restaurant. Each night, we shall begin with a welcome reception at HI-SO, where plenty of shimmering bubbly will be on pour. The extravagant eight-course experience lets curious epicures taste the culinary arts of eight different renowned chefs. Every dish is totally bespoke, truly beautiful and incredibly Instagram-worthy. As seats are limited, keeners are recommended to book well in advance. Recapped of 3-Night with Michelin dinner experiences below;

Sunday 22nd September 2019, THE FINAL ROUND, THE SO AMAZING CHEFS EDITION

Leading this year event with our Head Culinary Designer, Chef Thomas Smith, together with AccorHotels chefs will also play supporting roles in SO Amazing Chefs 2019 which is taking place from 15 – 22 September 2019 at SO Sofitel Bangkok. 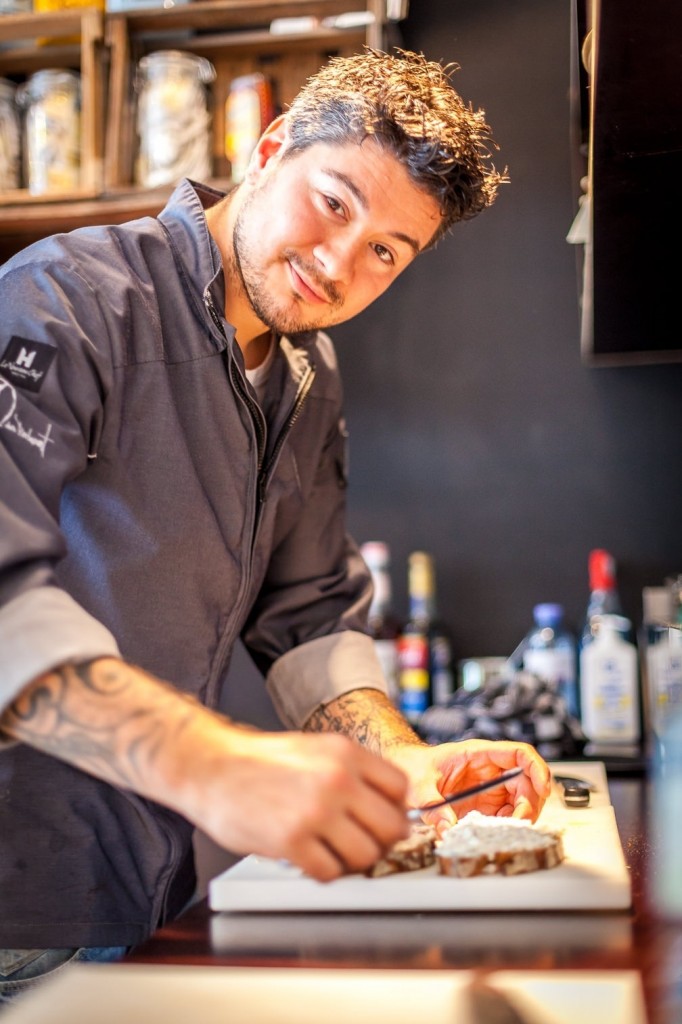 Ambitious and aspirational, chef Bastian Falkenroth made his way to the two Michelin-starred restaurant Le Moissonnier at the young age of 20. Named the favorite chef of the year by the newspaper Frankfurter Allgemeine Zeitung, chef Bastian then took his culinary career to the limelight by opening his very own one Michelin-starred restaurant U. das Restaurant in Dusseldorf of Germany. 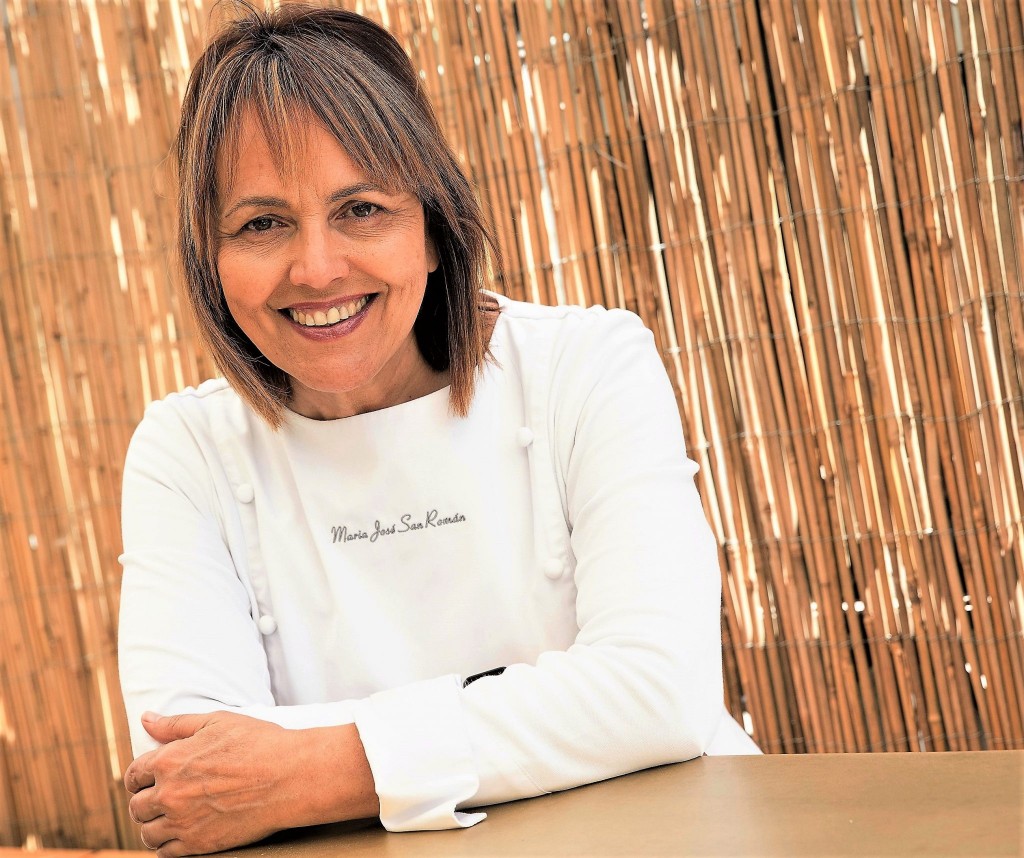 An inspiring Spanish chef and restauranteur, Chef Maria Jose San Roman dotted the provinces of Alicante and Valencia on the culinary map for all-star foodies. Fusing authentic Mediterranean flavors with her own splash of imagination, chef Maria presents inventive dishes at her own Michelin-starred restaurant named Monastrell. As the proprietor of Grupo Gourmet Alicante, she also oversees a collection of six restaurants plus an artisan bakery workshop. 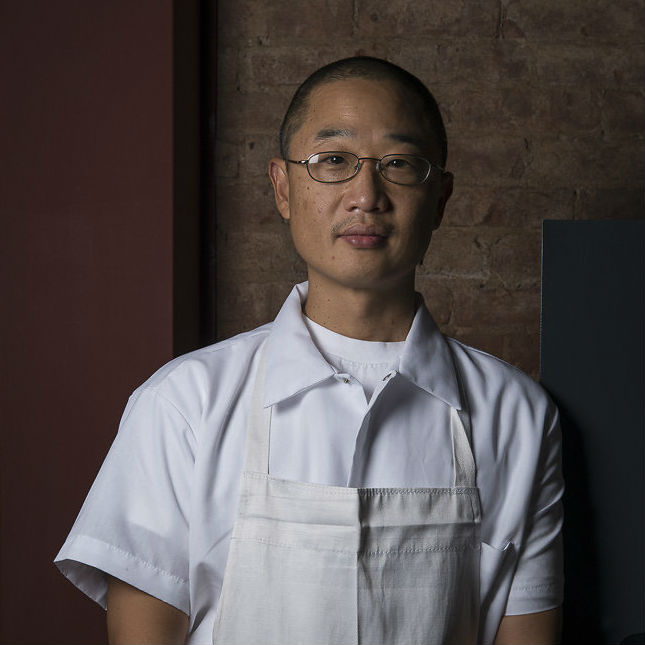 While Chef Nick Kim kick-started his culinary journey across Europe, he spent most of his formative years working alongside Masa Takayama at Ginza Sushi-Ko in Los Angeles. As one of the masterminds behind the success of Shuko in East Hampton and New York City, Chef Kim has been awarded numerous accolades including three Michelin stars and a four-star review from the New York Times. 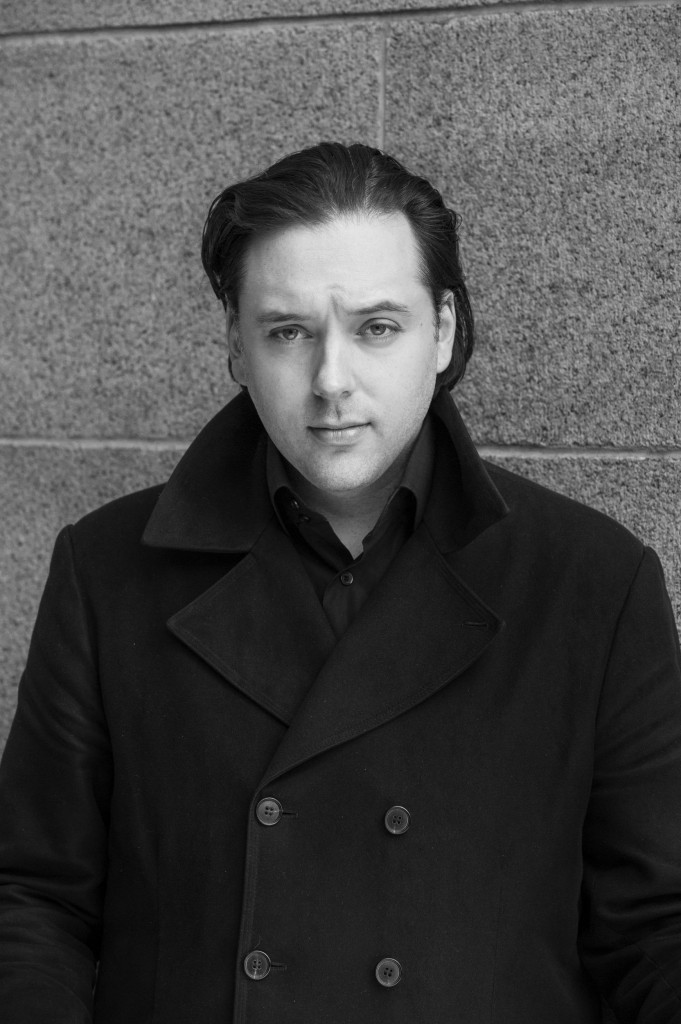 Best known for its now-closed two Michelin-starred restaurant Corton in New York, Chef Paul Liebrandt was considered one of the important pillars of the Big Apple’s culinary scene. Watch the Emmy nominated documentary entitled A Matter of Taste — Serving Up Paul Liebrandt to learn why this genius was named the youngest three-star chef by The New York Times, the best and the brightest by Esquire and best new chef by Food and Wine. 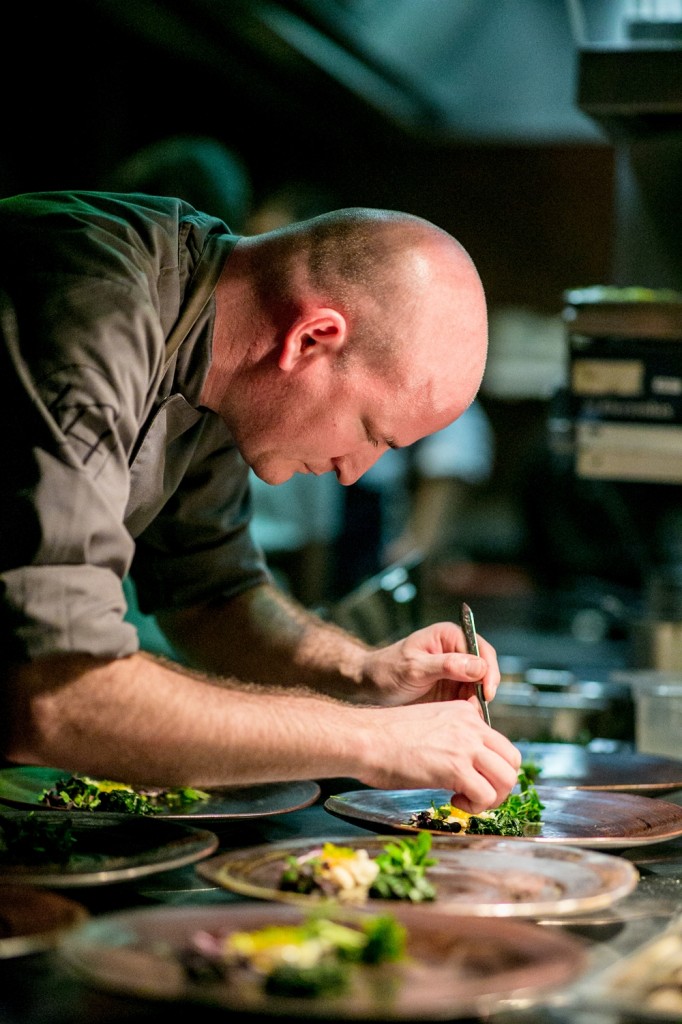 A culinary teacher with a lineup of up-and-coming protégés, Chef Rob Van Der Veeken is the head chef at the famed De Karpendonkse Hoeve. Situated in Eindhoven in the Netherlands, the restaurant is renowned for holding its Michelin star ever since 1979. Helmed by
Chef Rob, De Karpendonkse Hoeve continues to achieve new heights with his new culinary creativity. 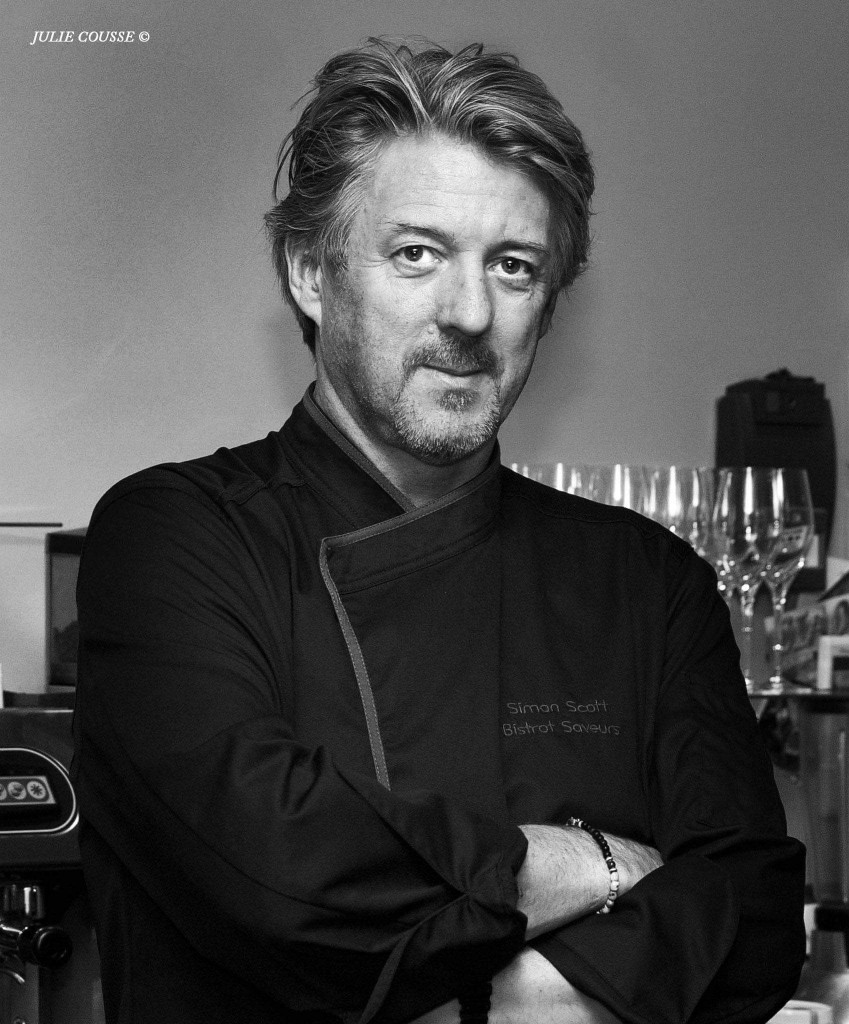 The chef-owner of 1 Michelin-starred Bistrot Saveurs is one of only two British Michelin-starred chefs in France, the other being chef personality Gordon Ramsay. Prior to relocating permanently to France, he was the executive chef at the Savory Grill and before that assistant chef at the Ritz Hotel in London.

A master in kappō-dining, Chef Takatomo Izumi is the owner of the one Michelin-starred restaurant Jiki Miyazawa in Kyoto of Japan. Dining at this single-counter restaurant is an unforgettable experience; dish after dish chef Izumi surprises you with simple, blissful flavor combinations. With the freshest ingredients and culinary precision, chef Izumi brings his A-game every single time. 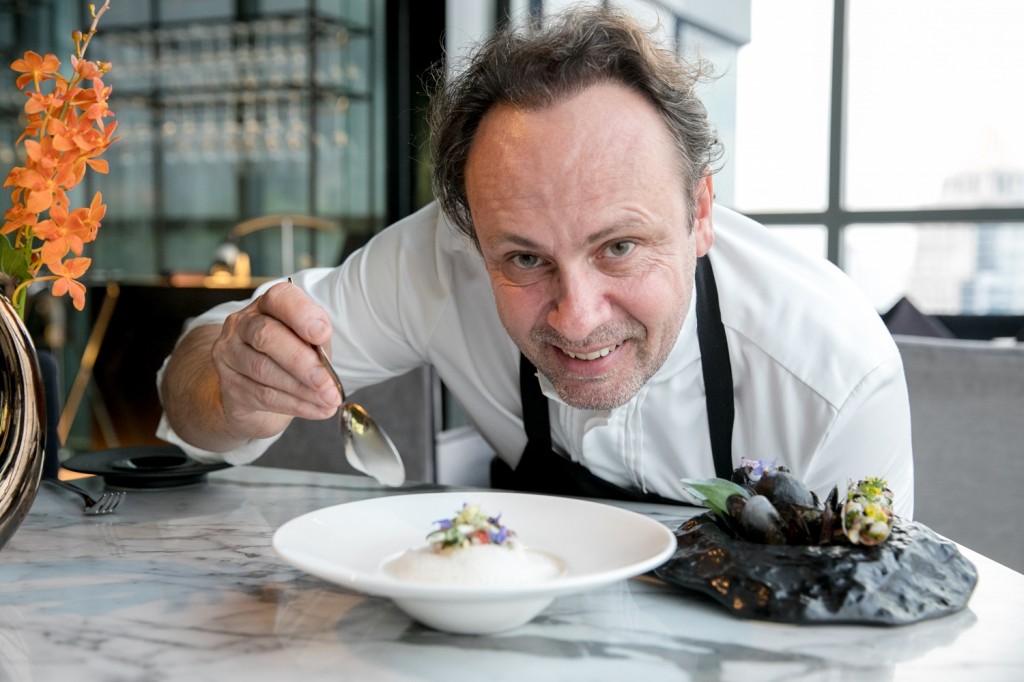 For more than 15 years now, Chef Thierry Drapeau has been perfecting his craft in the culinary world. When challan ducks — his speciality go-to produce — fall into chef Thierry’s hands, he transforms this star ingredient into a magnificent masterpiece. Situated in the historic Logis de la Chabotterie, chef Thierry’s two Michelin-starred namesake restaurant has garnered much compliments and awards. Now a chef and restaurant owner, chef Thierry also has a new exciting establishment named L’escale by Thierry Drapeau in Saigon.

Over his 20-plus years of experience in the UK and France, SO Sofitel Bangkok’s Head Culinary Designer has worked in a number of Michelin starred restaurants, including London’s Savoy Hotel and Les Saveurs in Toulouse, as well as a stint at a six-star hotel in Dubai. Over the years, he also had the pleasure to collaborate with legendary chefs including Heinz Winkler, Michel Roux, Gary Rhodes, and James Martin.

Chef Thananya “Gai” Kaikaew is the only female chef from the Iron Chef Thailand TV show. Her specialization lies in sweets, so it’s no surprise that desserts star at her restaurant.
Her unique and strong skillfulness in dessert making was built since her early age where sweets are her personal preference. Today, her accomplishment is beyond her dream. Every sweet item that she made is full of imagination and creativity like an art masterpiece that is full of origination and determination. 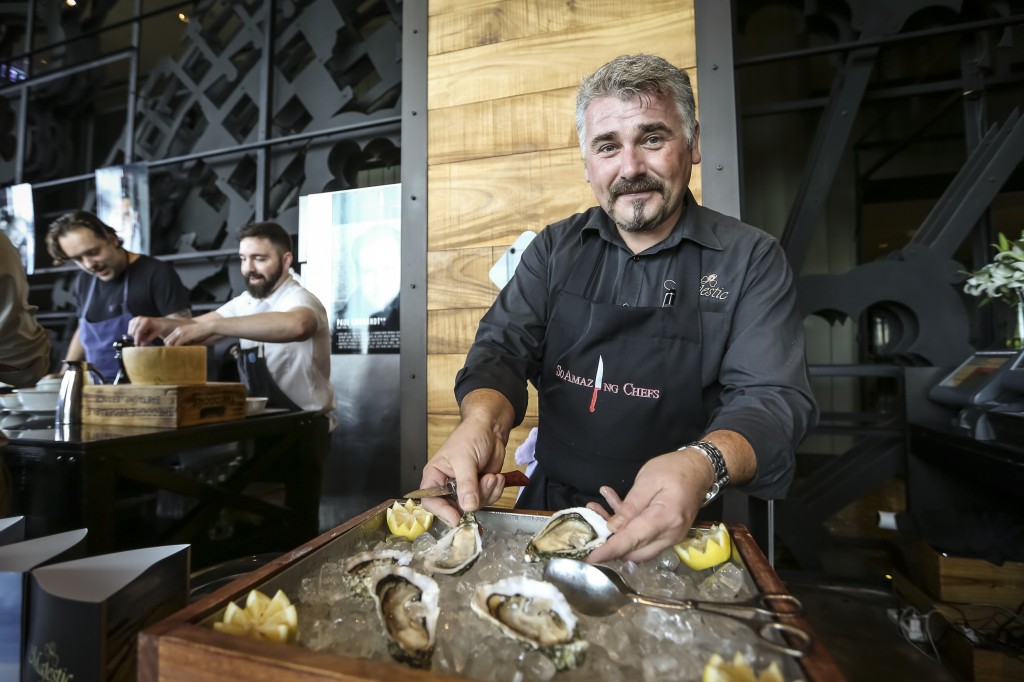 Born to restaurant owner parents, Jacques is no stranger to the world of good food. After obtaining a tourism degree, he worked his way up from commis waiter to F&B consultant before moving to Ireland where he cultivated oysters for 15 years. In 2011, he moved to the world-famous oyster cultivation area Marennes-Oléron in his native France, where he has been exporting top quality oysters from his oyster farm and packing center to Asia since 2009. 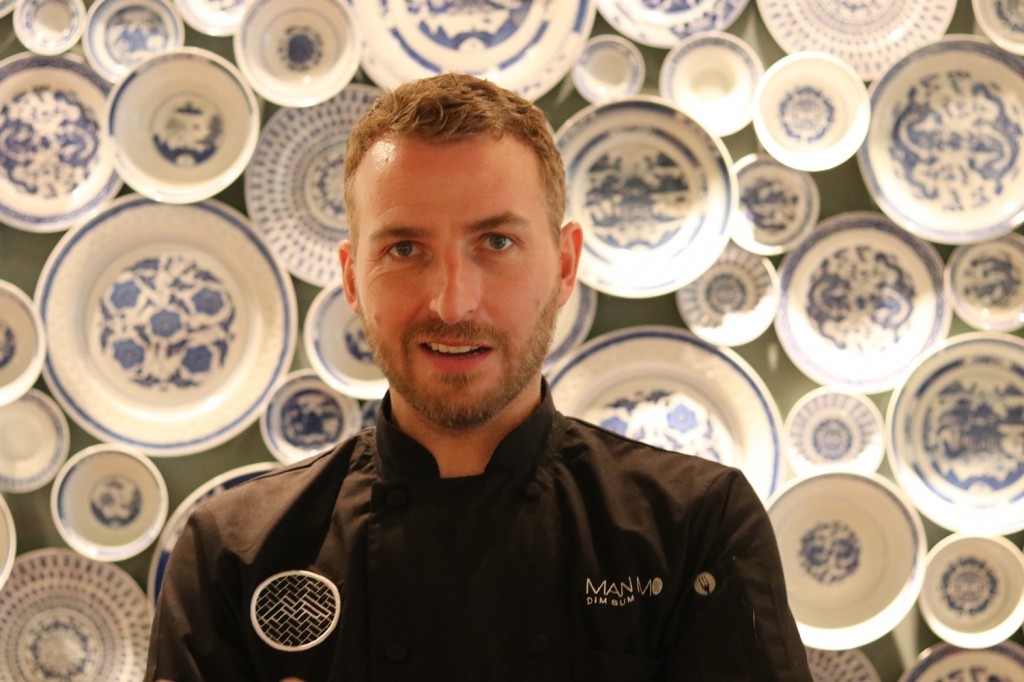 The Les Frères Marchand brothers are maintaining their family’s long tradition in fresh dairy produce specializing in cheese, an involvement that dates back to 1880. Philippe, an active member of the Select Committee of the French Association of Cheesemakers-Affineurs and member of the International Cheese Guild, is in charge of the cheese business, while Patrice manages the kitchens of the ‘Lez’art’, ‘P’tit Cuny’ and ‘P’tit resto du marché couvert’ restaurants in Nancy, France.

THE LOVE OF OYSTER

THE NIGHT OF KAISEKI

SO AMAZING CHEFS, THE CULINARY SHOWDOWN **SO POPULAR**
PRICE: THB 4,500++ PER PERSON FOR 4-COURSE DINNER, WITH WINE PAIRING

All prices are subject to 10% service charge and 7% government tax.
SO Sofitel Bangkok Bangkok reserves all rights to update or modify this program at any time without prior notice. #SOAMAZINGCHEFS2019
Book early, save more. Grab the early tickets today via http://bit.ly/2L1nS5p. Limited seat only.

SO/ Sofitel is so vivid, so expressive and so bursting with local energy that even the most adventurous travelers will be fascinated and entertained. An energizing addition to the global hotel scene, the SO/ brand surprises with a playful and distinctly rebellious interpretation of luxury that includes avant-garde design, a fashion signature, trendy beats, ‘Just Say SO’ service, ‘and buzzing destination bars and events. Found in exhilarating hubs such as Mauritius, Bangkok, and Singapore, SO/ hotels are the places to be and be seen, thrilling guests with fashionable and entertaining social experiences that capture the vivacity and vibe of the locale. SO/ Sofitel is part of AccorHotels, a world-leading travel and lifestyle group which invites travelers to feel welcome at more than 4,300 hotels, resorts and residences, along with some 10,000 of the finest private homes around the globe.