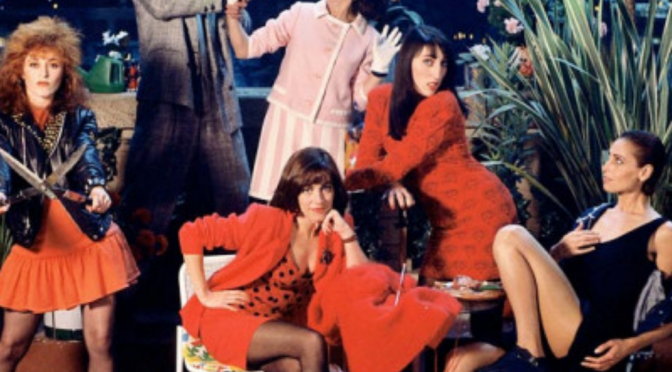 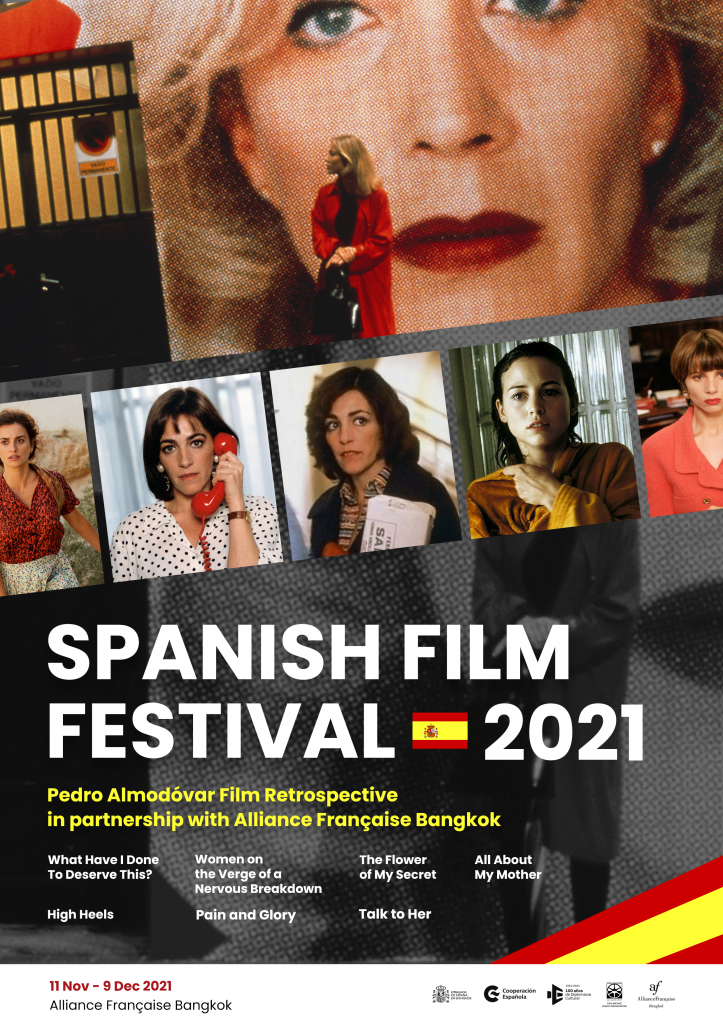 The Embassy of Spain joins hands with the Thai Film Archive and is pleased to announce the launch of the Spanish Film Festival dedicated to Pedro Almodóvar Film Retrospective.

●  Spanish Film Festival is set to take place from 11 November to 9 December 2021, at Alliance Française Bangkok.

●  The program aims to empower feminism and celebrate inclusiveness through the oeuvre of Pedro Almodóvar, the most internationally acclaimed Spanish filmmaker.

●  The program will show seven of Almodóvar’s works spanning over three decades, including the Academy Awards-winning movie from the 1900s and Cannes’ Palme d’Or-nominated masterpiece in 2019

The Embassy of Spain, in collaboration with Thai Film Archive, is pleased to announce Spanish Film Festival to take place from 11 November to 9 December 2021, at Alliance Française Bangkok. The five-week-long film festival is dedicated to Pedro Almodóvar Film Retrospective and set to screen seven of Almodóvar’s best works, from Academy Awards-winning movies to Cannes’ Palme d’Or- nominated masterpiece.

While Almodóvar’s cinematic entirety remains faithful to the root of native Spain, celebrations of feminism and inclusiveness conveyed and displayed on-screen converge and resonate on the global stage and likewise in Thailand. As for Almodóvar’s film retrospective, all appear to share one thing in common: a portrayal of women facing challenges and societal pressures.

H.E. Emilio de Miguel Calabia, the Ambassador of Spain to Thailand, said: “Pedro Almodóvar is one of the best filmmakers in Spain and the world. Thanks to his vision, women have felt recognized, valued, and empowered. The truth is that in Almodóvar’s perspective, which is full of acceptance and tolerance, we all fit, regardless of sex, origin, or orientation. Almodóvar shows our vulnerabilities, desires, and passions. He shows all the things that make us more human.”

The opening night screens What Have I Done To Deserve This? (1984) which depicts female frustration and family breakdown in post-Franco Spain, starring a legendary Carmen Maura. Then, Women on the Verge of a Nervous Breakdown (1988) centres on a female character’s life after a sudden breakup; the actual Spanish movie title refers to ‘ataque de nervios,’ a culture-bound psychological syndrome where individuals dramatically respond to upsetting events.

While High Heels (1991) navigates a mother-daughter relationship amid a murder mystery, The Flower of My Secret (1995) takes on a mix of comedy and melodrama built around a successful romance writer yet an unlucky wife. The film festival also includes Almodóvar’s Academy Awards-winning titles: All About My Mother (1999), setting forth the power of sisterhood and family, and Talk to Her (2002), exploring a relationship between two men caring for the comatose women they love.

The film festival will conclude with the final screening of Almodóvar’s latest and Cannes’ Palme d’Or-nominated masterpiece dubbed Pain and Glory (2019), where an ageing Spanish film director suffering from chronic illness and creative crisis revisits childhood moments in flashbacks. The movie is highly-praised by critics as it is one of the most semi- autobiographical in his long career.

“The Embassy of Spain is pleased to share with our friends in Thailand the light-filled gaze of Almodóvar, as a symbol of optimism and hope for a better future, in which we all fit,” H.E. Emilio de Miguel Calabia added.

Spanish Film Festival is indeed a unique occasion to celebrate and honour culture, tradition, and deep friendship between Spain and Thailand through a multitude of possibilities.

One movie in the order mentioned above will be screened in voice-over (VO) with English subtitles every Tuesday and Thursday at 6:30PM throughout the five-week-long program. Tickets 60 THB on Alliance Française Bangkok.

In full compliance with social distancing and sanitary precautions, all screenings at Alliance Française Bangkok and the Thai Film Archive in Salaya, Nakhon Pathom will abide by COVID-19 preventive measures issued by the Government and Bangkok Metropolitan Administration (BMA). All visitors must wear a mask at all times, undergo non-intrusive temperature checks upon, and scan a QR code or fill in a sign-in sheet at the entrance. Everyone is encouraged to practice social distancing (1.5 meters; four people maximum in the elevator), disinfect your hands with the hydroalcoholic gel at your disposal, or wash your hands regularly.