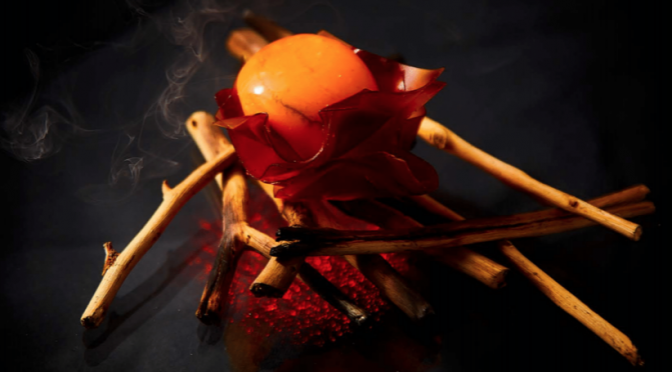 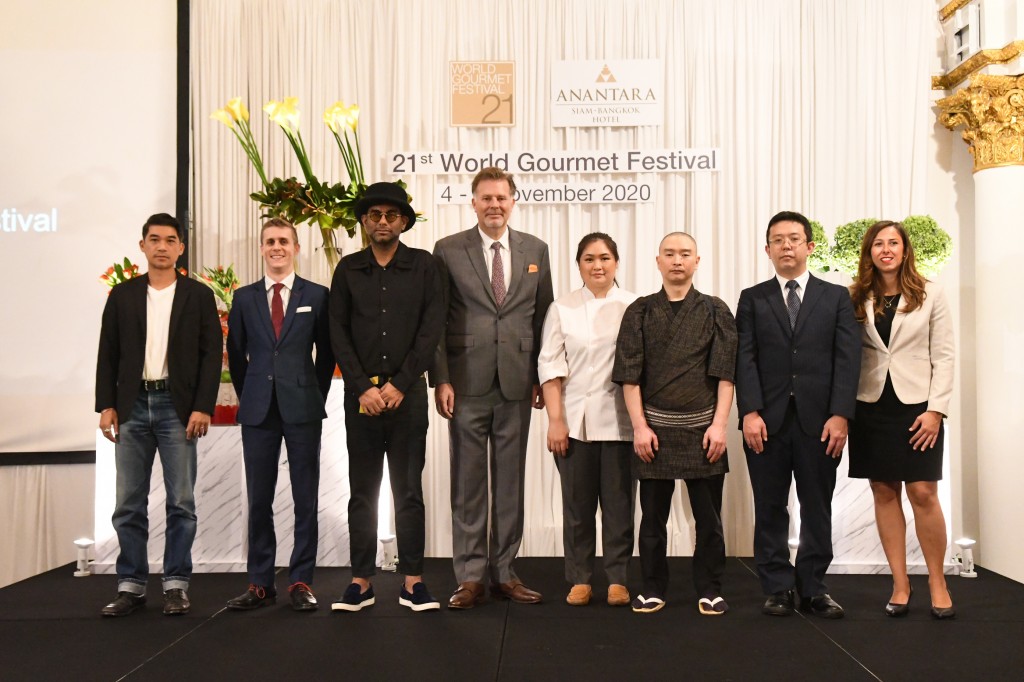 Prepare your palate for the gastronomic festivities this November when Bangkok’s oldest international culinary spectacular returns to one of the capital’s most exclusive addresses for a landmark 21st year.  From 4th to 8th November 2020, a star-studded line-up of extraordinary Thailand-based chefs – some of whom count among the world’s leading chefs – will gather under one roof at Anantara Siam Bangkok Hotel for a celebration of outstanding cuisine and superb wines. 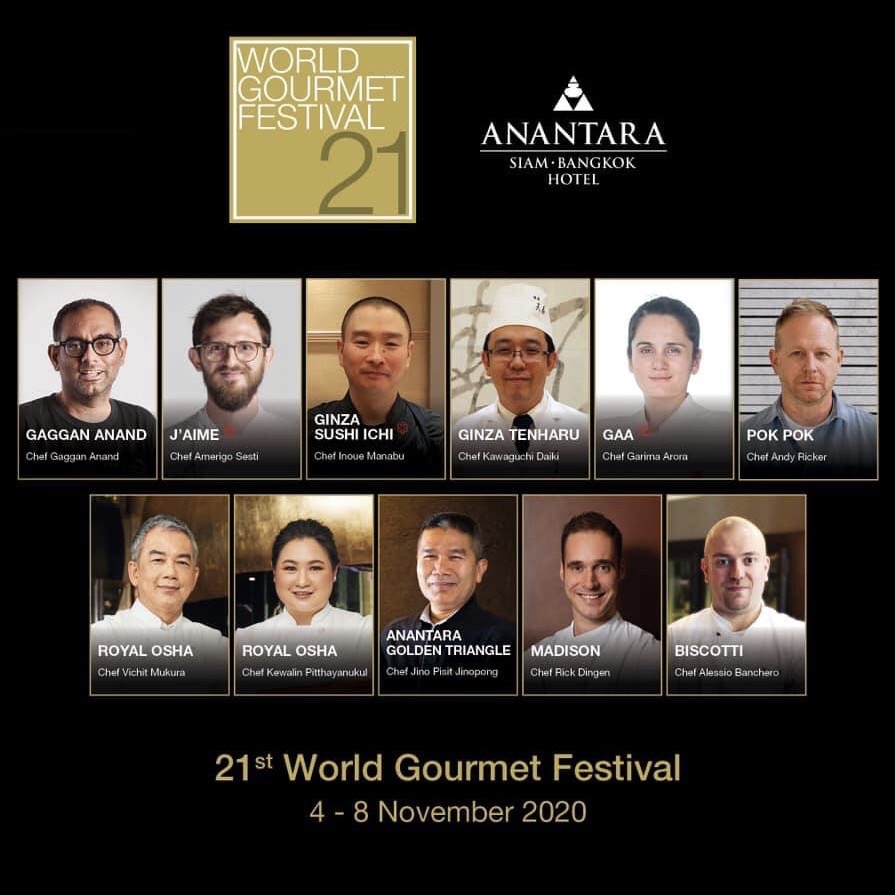 Expect exciting culinary firsts; unique Thai and western collaborations; Bangkok’s longest Sunday Brunch; and an extraordinary gastronomic and cultural journey around the world by people less fortunate than us that will benefit them directly.

Confirmed to participate in the 21st World Gourmet Festival are: 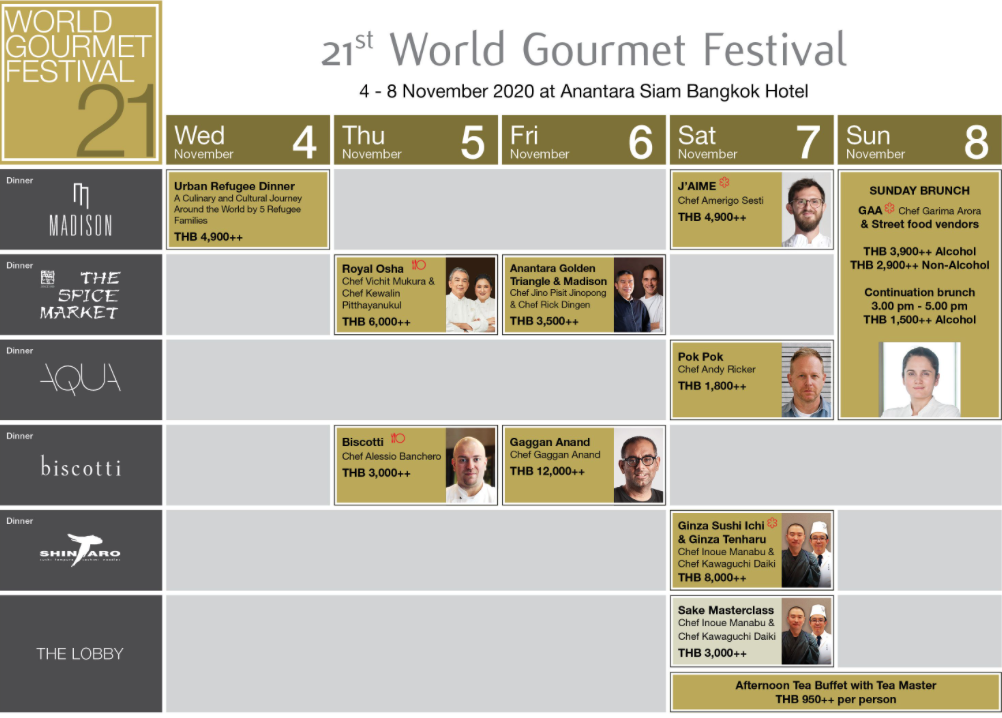 A much-anticipated and unexpected gastronomic highlight during this year’s festival, on Friday, 6th November 2020, Gaggan Anand will present a culinary first for the four-time Asia’s 50 Best topper when he prepares a once off eighteen-course Escoffier menu.  The former two-Michelin-starred chef who has dreamed about mastering the art of classic French cuisine since he graduated from culinary school more than twenty years ago, said, “Till today no one knows how bad or good I am with French food, so I want to challenge myself to create what Gaggan Anand is famous for – to be a rebel, to provoke and disrupt.”

In another culinary first for both chefs and their restaurants, one-Michelin-starred chef Inoue Manabu from Ginza Sushi Ichi and Kawaguchi Daiki from from Ginza Tenharu will partner to present their signature dishes of sashimi, nigiri and tempura on one menu on Saturday, 7th November 2020.

On Wednesday, 4th November 2020, five refugee families from Ethiopia; Pakistan; Palestine; Sri Lanka; and Vietnam will present an extraordinary culinary and cultural journey around the world when they prepare a feast of traditional dishes from their home countries.  Refugees arrive to Thailand as a layover awaiting settlement to a new country that sometimes takes up to ten years.  At the Na Projects Group at Na Café at Bangkok 1899, legal refugees who are temporarily stuck here due to the pandemic are finding a platform for vocational training programmes for at-risk youth and training and workshops for urban refugees to become baristas and cooks, amongst others.  All proceeds from this dinner will be paid to the five families. 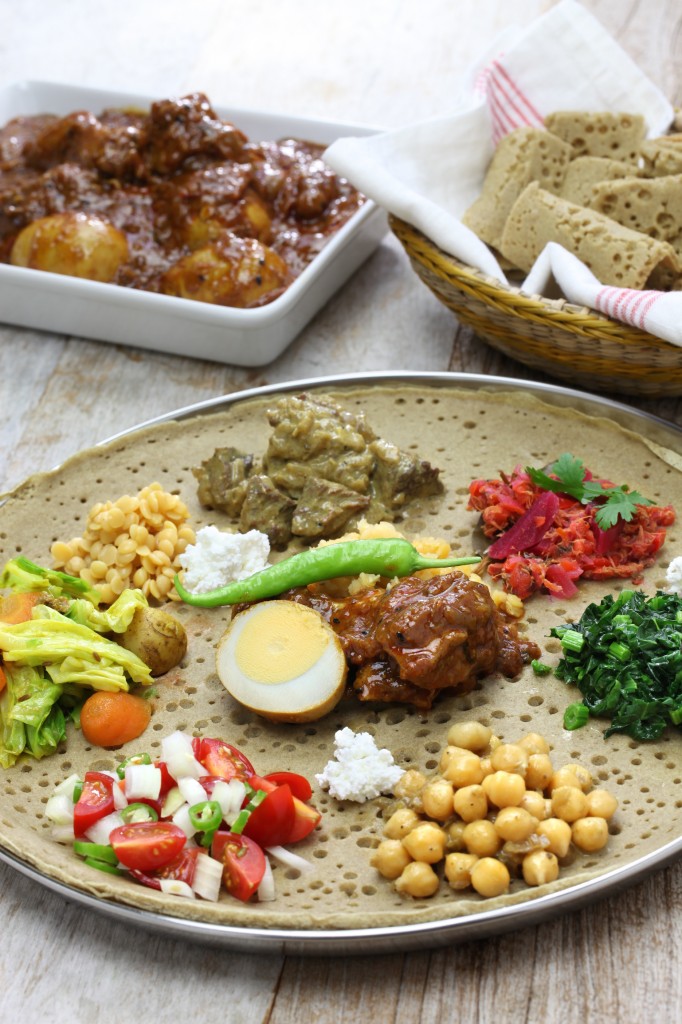 Continuing the crowd pleaser tradition that was started during last year’s event, Anantara Siam Bangkok Hotel will showcase the City of Angels’ enviable status as the best city in the world for street food on Sunday, 8th November 2020 when Bangkok’s popular street vendors will prepare their fare in food stalls strewn around the Parichart open-air garden courtyard during the hugely popular World Gourmet Festival Brunch.  Expect Michelin Bib Gourmand Choy Ped Yang; Yaowarat Toasted Bread; Ni-Ang Nam Kaeng Sai; and Sarinthip Thai Crispy Crepe.  Diners can also indulge in many of the dishes featured throughout the Festival alongside top dishes prepared by one-Michelin-starred chef Garima Arora from GAA.  The World Gourmet Festival Brunch, Bangkok’s longest Sunday Brunch, will flow from 11.30am to 5pm and Anantara’s Kids’ Club will entertain the young ones while parents feast.

The 21st World Gourmet Festival is a proud supporter of HRH Princess Soamsawali Krom Muen Suddhanarinatha HIV Prevention Fund.  A portion of each dinner ticket sold will be donated to the Fund.  The donation campaign was initiated with the key objective to prevent mother-to-child transmission of HIV. Since 2000, the Festival generated almost THB 15,000,000 for the charity.

Reservations for the 21st World Gourmet Festival at Anantara Siam Bangkok Hotel are essential and can be made by contacting 0 2126 8866 ext. 1201, email wgf.asia@anantara.com or visiting www.worldgourmetfestival.asia, where detailed information and prices of all the events are available.

Anantara Siam Bangkok Hotel’s Amazing World Gourmet Festival accommodation package offers gourmands a sumptuous opportunity to experience a culinary feast by extraordinary Thailand-based chefs.  All diners who purchase dinner tickets at this year’s Festival can stay over at Anantara Siam on the night of their dinner or brunch, starting from THB 1,500 net in a Deluxe Room; THB 3,000 net in a Siam Suite; and THB 6,000 net in an One-Bedroom Suite.  The rates include breakfast for up to two people sharing a room and are available upon request.  For more information about this special offer or to make a reservation, please contact Anantara Siam Bangkok Hotel on email reservations.asia@anantara.com or telephone 0 2126 8866. “The year 2,000 marked a new millennium and as a young chef graduate, I started as a kitchen management trainee at the Taj Group. There I learned the basics of the industry, but at that point I had not found Indian cooking very attractive, and thus was more interested in learning about western cooking. My mission became to perfect my abilities in French cooking. However life is all about uncertainty, and I left the job on a whim and went on a solo career of struggle, uncertainty, and growth. I had my midlife crisis considerably early back then and learned lessons that you couldn’t buy in the most famous university, but rather ones that only come with reality checks.” Italian native Chef Amerigo Sesti has worked in a number of Michelin-starred establishments throughout Europe in his quest for achieving culinary excellence. Since graduating in Tourism and Gastronomy from the Lycée d’Hotellerie de Gascogne and after attending the prestigious catering school of San Pellegrino he has had the opportunity to work under eminent names in the restaurant field including Alain and Michel Roux and Patrick O’Connell.

Before relocating to Thailand he honed his skills to a fine degree at Jean-Michel Lorain’s Côte Saint Jacques, itself the holder of Michelin stars, under the tutelage of Jean-Michel himself. 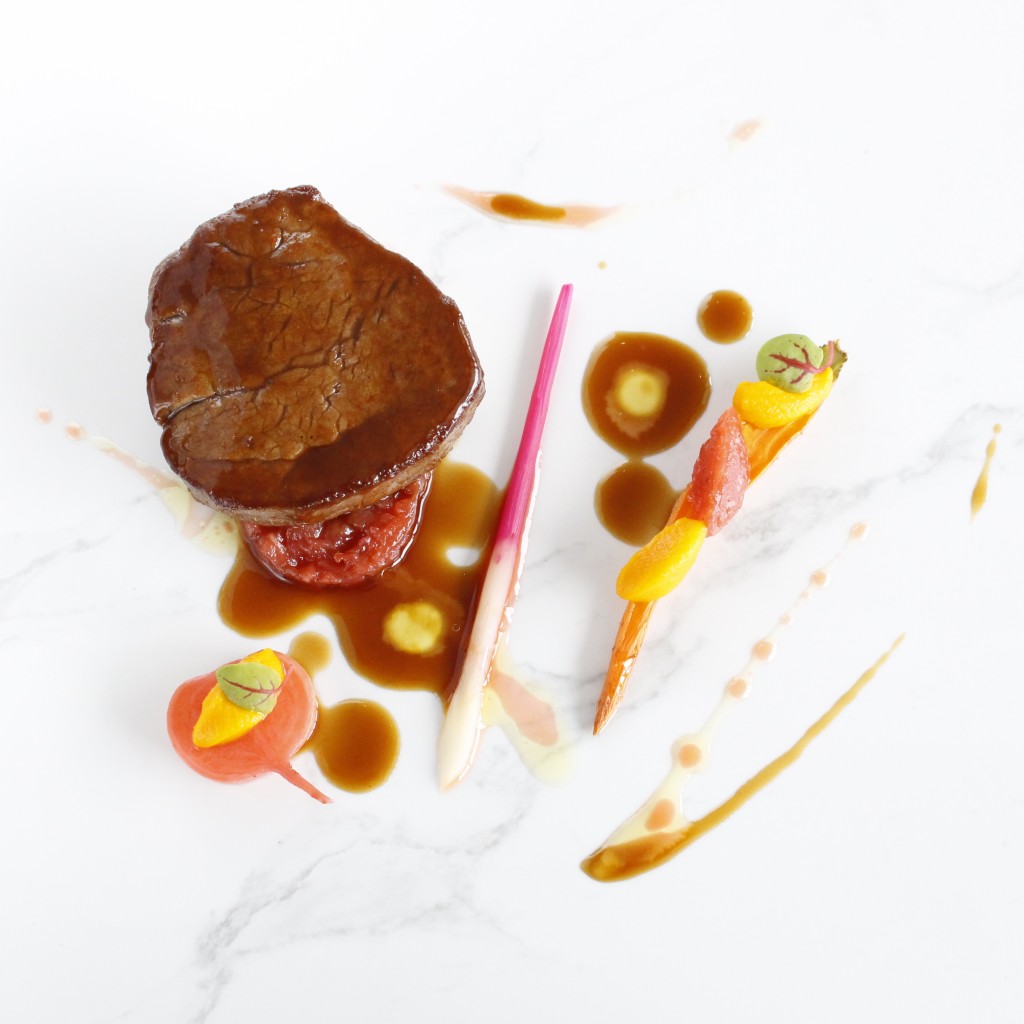 Garima Arora is the chef and co-owner of Restaurant Gaa in Bangkok, a modern Indian restaurant in Bangkok with a focus on creating a unique and engaging dining experience using traditional and forgotten Indian cooking techniques.

Her culinary journey began in her family’s humble kitchen in Mumbai, India. It all started with watching her father’s joy as she watched him recreating dishes from his frequent travel and she always knew that she would one day open her own restaurant and it was only a matter of time. Despite her love of food, it took her some time to return to the kitchen. She first enrolled at Jai Hind College where she graduated with a degree in Mass Media. Arora worked briefly as a journalist before returning to her culinary roots. She left Mumbai for Paris to study at Le Cordon Bleu and since then never looked back. In the last decade, Arora has worked alongside many world-renowned chefs such as Gordon Ramsay, René Redzepi and Gaggan Anand. She moved to Bangkok in the end of 2016 then opened Restaurant Gaa on 1 April, 2017. 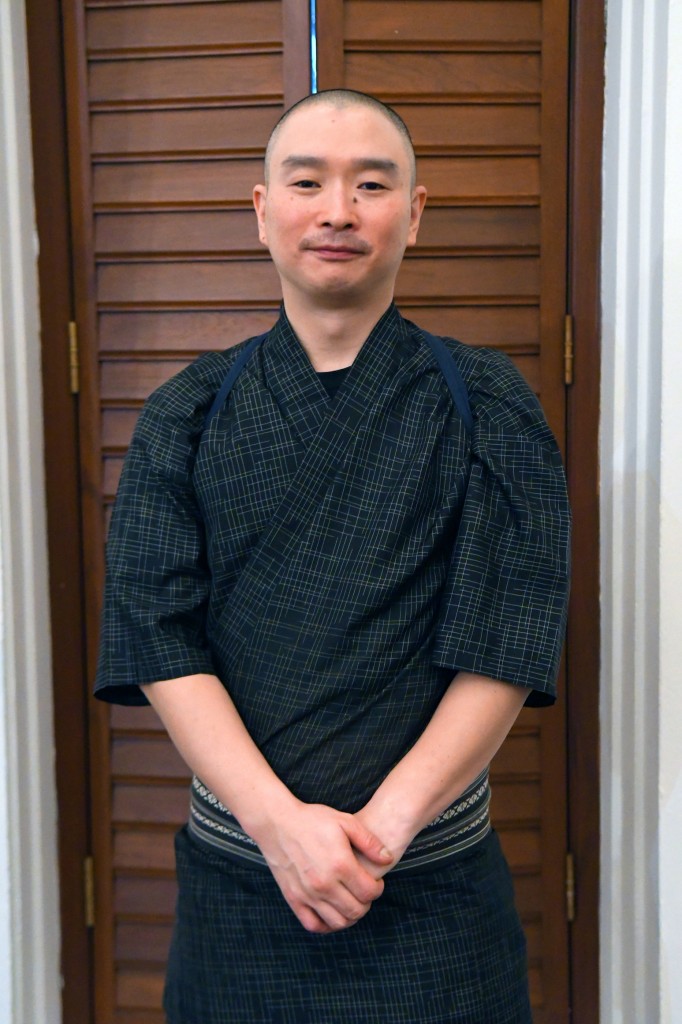 Inoue-san calls Hokkaido home and has also perfected his craft over than 20 years, culminating in a one-Michelin-star honour for Inoue Manabu.

We have been grateful to have had the good fortune of meeting so many wonderful customers. Come and enjoy delicious cuisine prepared from specially selected ingredients by our skilful chef at this secret spot in the Ginza district, where you can relax and experience our warm hospitality.

We look forward to meeting you – from all of the staff at Sushi-ichi. 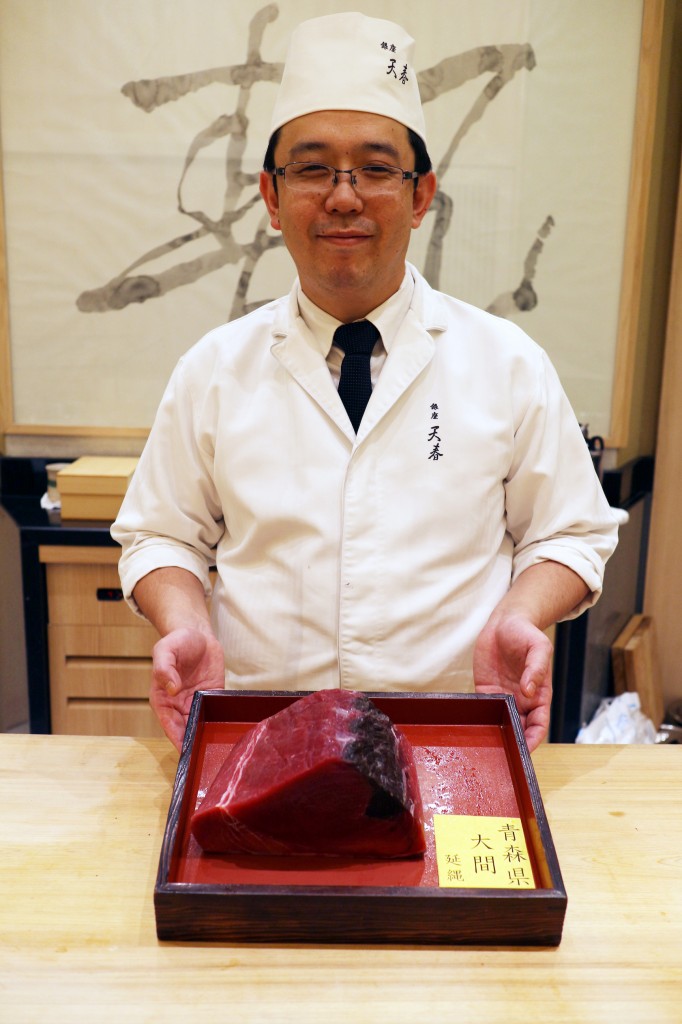 Daiki-san hails from Osaka and has more than 20 years’ experience in Japanese fine dining under his belt, including as a tempura master.

We have given deep consideration to choosing the best seasonal ingredients for our menu to provide the best of tempura. Please experience the four Japanese seasons through our carefully selected menu.

Please savour the taste, aroma, and color of the four seasons with your five senses.

An aromatic cedarwood counter table is the only seating in TEHHARU.

TENHARU is located in a quiet corner of the busy Ginza area of Central Tokyo, as a soothing hideaway for you to take a breather.

We hope you enjoy our exquisite pieces in this graceful space inspired by traditional Japanese tea houses. Chef Vichit Mukura, Executive chef at Royal Osha Thai Restaurant, expressed his delight to be a part of Royal Osha by making Thai food. Be accepted Ready to take Thai food to the next level, which is a huge challenge. “I want people all over the world to see Thai food is not just street food but food that is deep hidden in the culture, Royal Osha Chef’s Table menu has been created from my 40 years of work experience in Thailand. And abroad Is bringing good things from Thailand come together with excellent ingredients from around the world, which of course each dish is full of flavor, like traditional Thai food. And definitely worth the price” Chef Kewalin Pitthayanukul, Chef who researches and develops menus and the owner of Royal Osha restaurant tells about the difference of Royal Osha from Thai restaurant General premium there are dishes prepared by a famous Michelin chef. Pay attention to every step of food creation to be the restaurant everyone chooses for important days and occasions in life. With a selection of good quality local ingredients from farmers in various provinces across Thailand as well as searching for better-known items in each region, creating a menu of traditional Thai food with different local flavors, we have prepared a menu of Thai 4 regions ready to serve seasonal rotation In order to maintain the best value and taste of the ingredients Chef Andy Ricker worked in restaurants, fields, factories, shops and construction sites all over the world before opening his first restaurant, Pok Pok, in Portland, Oregon in 2005. He has since gone on to open and close several other restaurants of a similar ilk in Portland, Los Angeles and NYC and is the founder of Som beverage company. A two time James Beard Award winner and a once upon a time holder of a Michelin star for Pok Pok NY, Andy splits his time between Chiang Mai, Thailand and Portland, Oregon. He is also the author of Pok Pok: Food and Stories from the Streets, Homes and Roadside Restaurants of Thailand, Pok Pok: The Drinking Food of Thailand, and Pok Pok: Noodles. Chef Pisit’s much in-demand culinary skill and creativity in both Asian and Western cuisine come from his more than 25 years’ experience as a chef in top establishments from Macau to Maldives and from Singapore to Thailand.  During this time he also broadened his horizons of creativity and innovation whilst working as a guest chef in many hotels in Europe.  Chef Pisit’s expertise lies not only in daily kitchen operations, but in the opening of establishments and strategic planning too.  At Anantara Golden Triangle Elephant Camp & Resort in Northern Thailand he oversees the resort’s two restaurants, the well-known Anantara Cooking School, and other culinary experiences.  As native of the region, Chef Pisit is an avid aficionado of Lanna cuisine. Originally from Eindhoven, Chef Rick apprenticed in local restaurants before working his way up through various Dutch kitchens, including those of Restaurant La Rive at the InterContinental Amsterdam and the Michelin-starred De Heer Kocken. He also worked as Chef de Partie at the celebrated Inter Scaldes, which was awarded three Michelin Stars and named the best restaurant in the Netherlands. 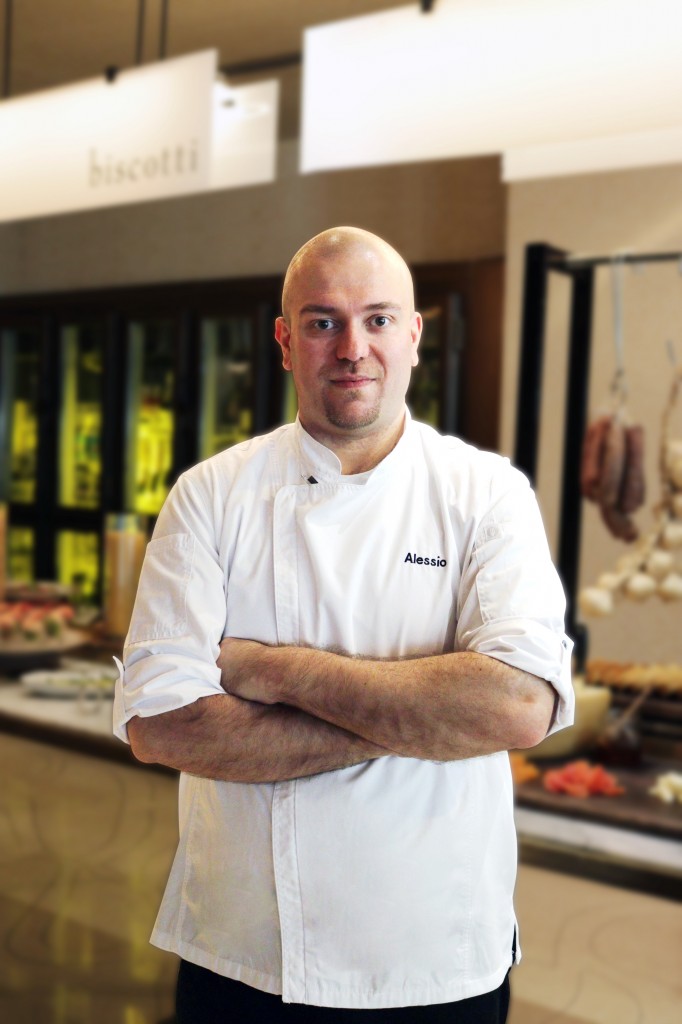 Hailing from Genova, the prolific chef brings more than 20 years of experience in five-star hotels and restaurants to Biscotti, for an exciting new gastronomic era.

Alessio Banchero trained at the Nino Bergese Culinary Institute in his home city before embarking on a journey upon which he has shared his passion for Italian cuisine with the world. His first foray out of his home country saw him managing and training a team of 25 chefs at Zeffirino at the Venetian on Las Vegas’ world-famous strip. Here, he was part of the team that won Best Italian Restaurant of Las Vegas two years running, in 2004 and 2005, and led the preparation of fine pastries that were shipped to the Vatican for the Pope. 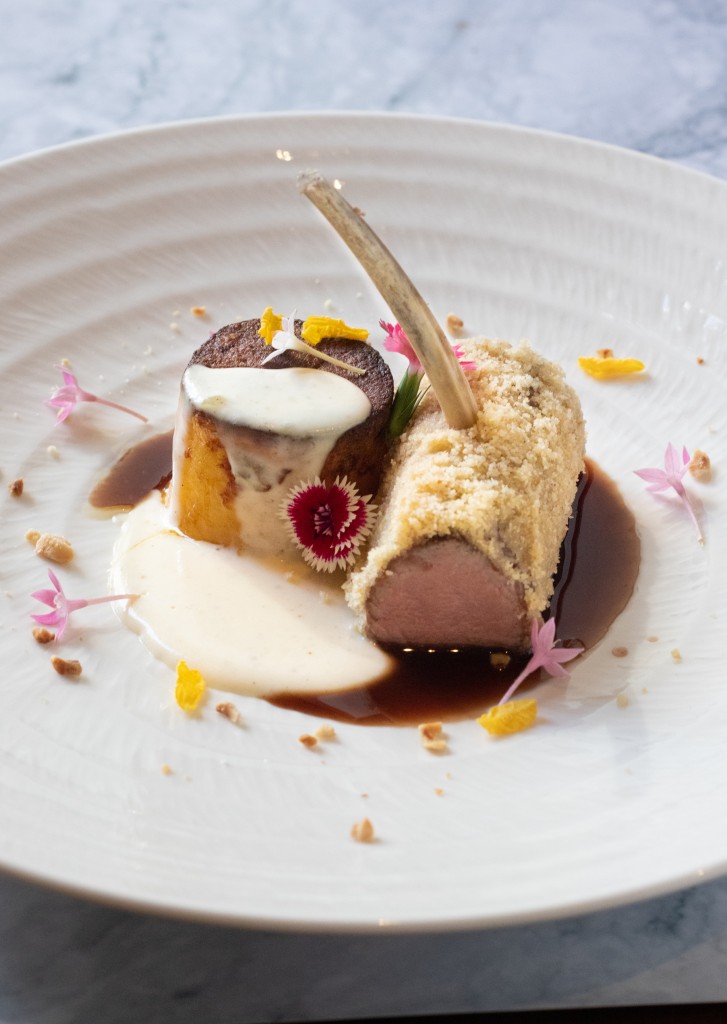