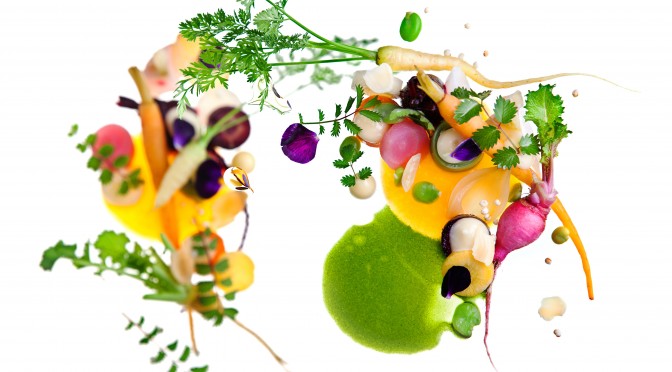 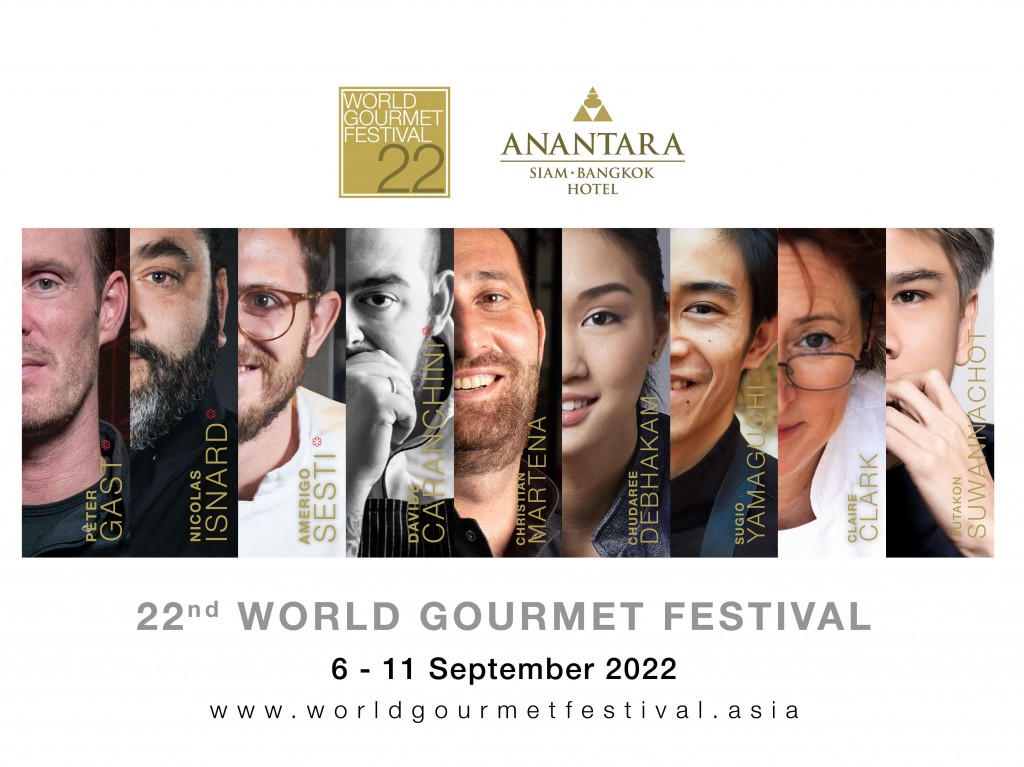 Bangkok’s most prominent and longest-running international culinary event, World Gourmet Festival returns to the City of Angels to gather award-winning Master Chefs under one roof for a weeklong celebration of outstanding food paired with superb wines in an environment that fosters free exchange of ideas.

Held from the 6th to 11th September 2022 at Anantara Siam Bangkok Hotel, the festival promises an extraordinary line-up of some of the world’s best chefs who will showcase their distinctive styles at one of the capital’s most exclusive addresses. Nine acclaimed chefs from the Netherlands, France, Italy, the United Kingdom and Thailand with four Michelin stars between them will present an international culinary extravaganza: 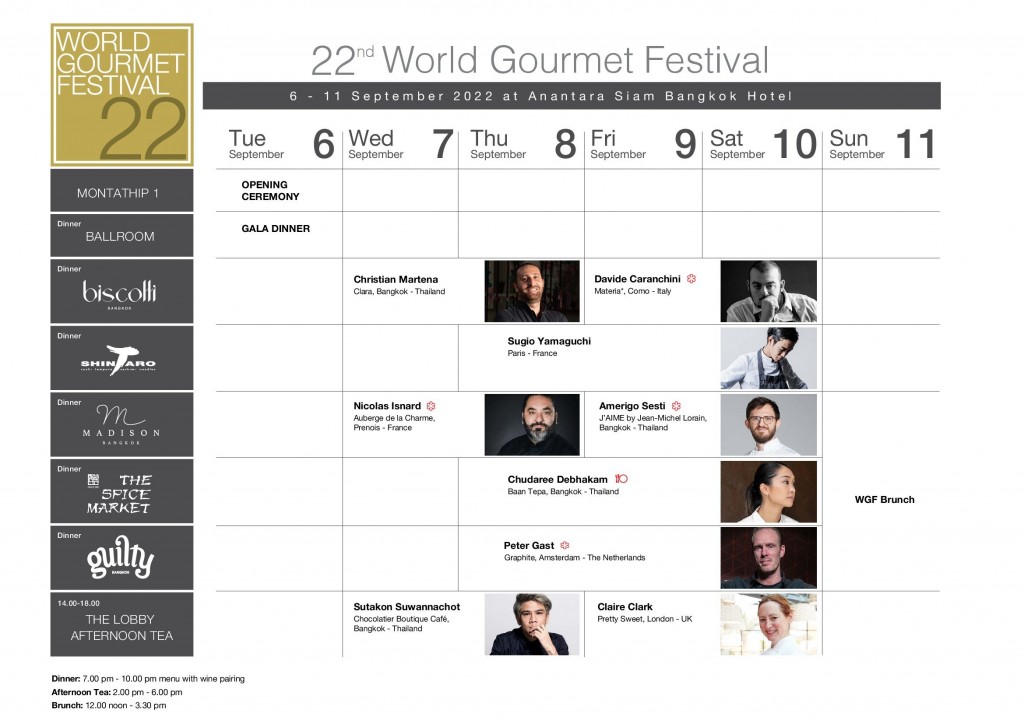 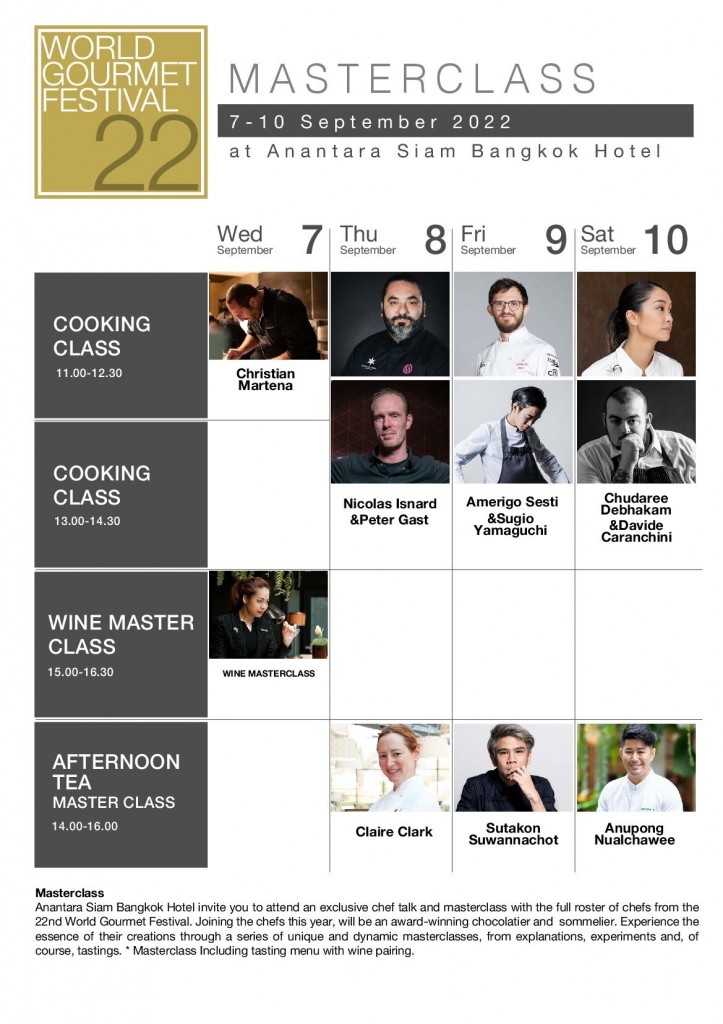 He set up his own restaurant in Netherlands, ‘t Schulten Hues in Zutphen (2002-2018) which featured mostly herbs and flowers cultivated and harvested by Gast. In less than two years he was awarded his first Michelin star, aged only 25. In September 2018, Peter and his wife moved to Amsterdam and opened their speak-easy restaurant Graphite in Amsterdam center. In January 2020 he received a Michelin star in Graphite. 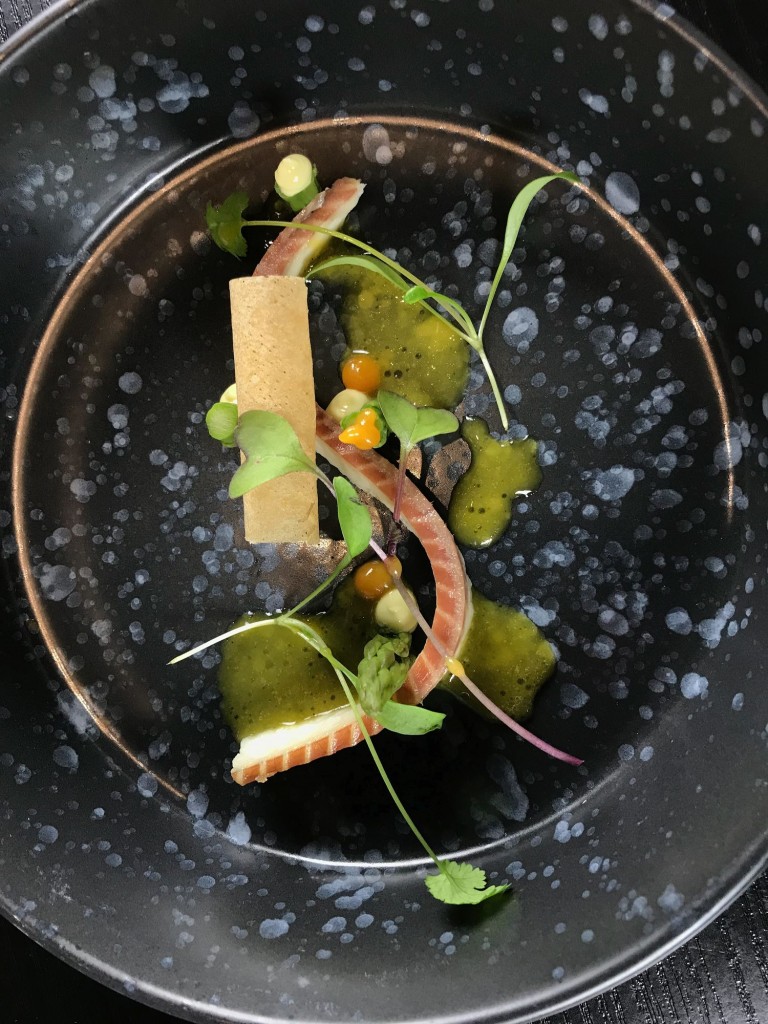 Davide is chef/owner of Materia in Cernobbio, recognised as one of Italy’s most interesting new restaurants and selected for inclusion into the ‘50 Best Discovery’ collection by the World’s 50 Best. After graduating from culinary school, Davide worked in some of Europe’s best restaurants, including Maze by Gordon Ramsay, Le Gavroche and Apsleys in London, and Noma in Copenhagen. Among his accolades are Best Italian Young Chef 2018 from L’Espresso restaurant guide and Michelin Guide inclusion in 2018. 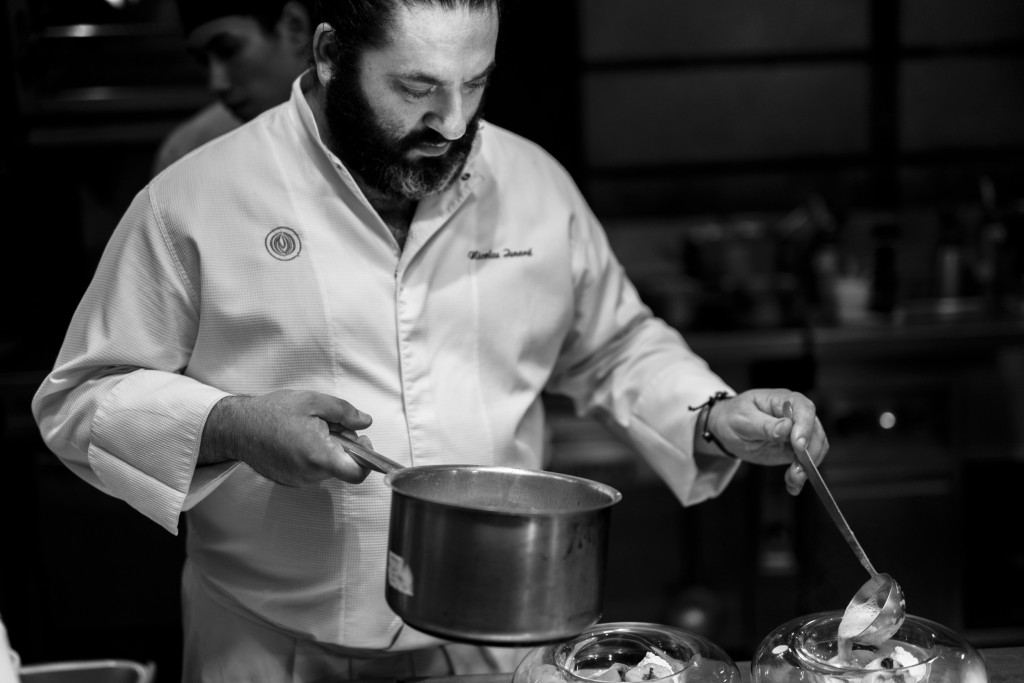 Born in 1977, Chef Nicolas started cooking from an early age and has been working in one, two or three-Michelin-star restaurants since 1999. He learns how to generalize luxury products, by creating for example Lobsters tagine and became Head chef of the Auberge du Vieux Puits at only 25. In 2000, he did his military service, which he completed as a cooker in Matignon. He stayed there for 10 months and keeps a dazzle memory of the official residency of the French prime minister. At 27, he was awarded the notable “Young Talent” award in the Poitou-Charentes region by the Gault Millau guide. Italian native Amerigo Sesti has worked in several Michelin-starred establishments throughout Europe in his quest for achieving culinary excellence. Since graduating in Tourism and Gastronomy from the Lycée d’Hotellerie de Gascogne and attending the prestigious catering school of San Pellegrino, he has worked under renowned names, including Alain and Michel Roux and Patrick O’Connell.

Before relocating to Thailand, he honed his skills to a fine degree at Jean-Michel Lorain’s Côte Saint Jacques, itself the holder of Michelin stars, under the tutelage of Jean-Michel himself.

J’AIME by Jean-Michel Lorain was conceived and created by Michelin star recipient Jean-Michel Lorain to bring an eclectic fine dining experience to the City of Angels. Since J’AIME’s opening in 2014, the kitchen has been run under the watchful and exacting eye of Chef Amerigo Sesti and has become a Michelin-starred establishment due to the innate innovation, creativity, passion and teamwork of both men. 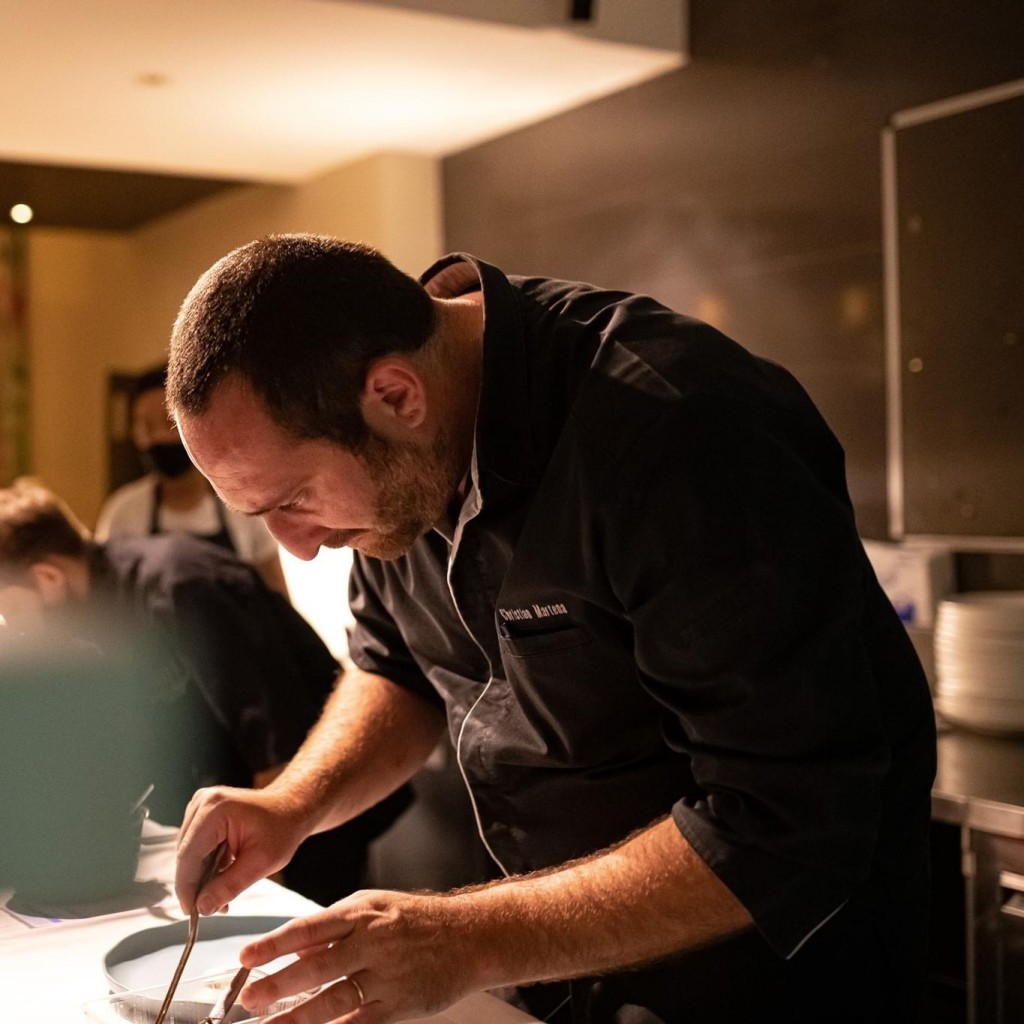 Italian Chef Christian Martena runs what many believe to be Bangkok’s best-looking restaurant. Clara, set in a by-lane of Yen Akart, serves modern Italian cuisine focusing on dishes that offer comfort rather than a gastronomic challenge. At Clara, ingredients are given an opportunity to shine without overwhelming with unfamiliar flavours or textures. Chef Christian takes great pride in paying careful attention to the provenance of the ingredients and sources most locally. Japanese chef at the Botanique restaurant in Paris. Naturalist and inspired by the finest French cuisine, Sugio Yamaguchi’s style expresses the spirit of the Lyon region whose great chefs have seen him build his culinary identity. He states that “Appearance cooking can only satisfy the eyes but not the heart.” 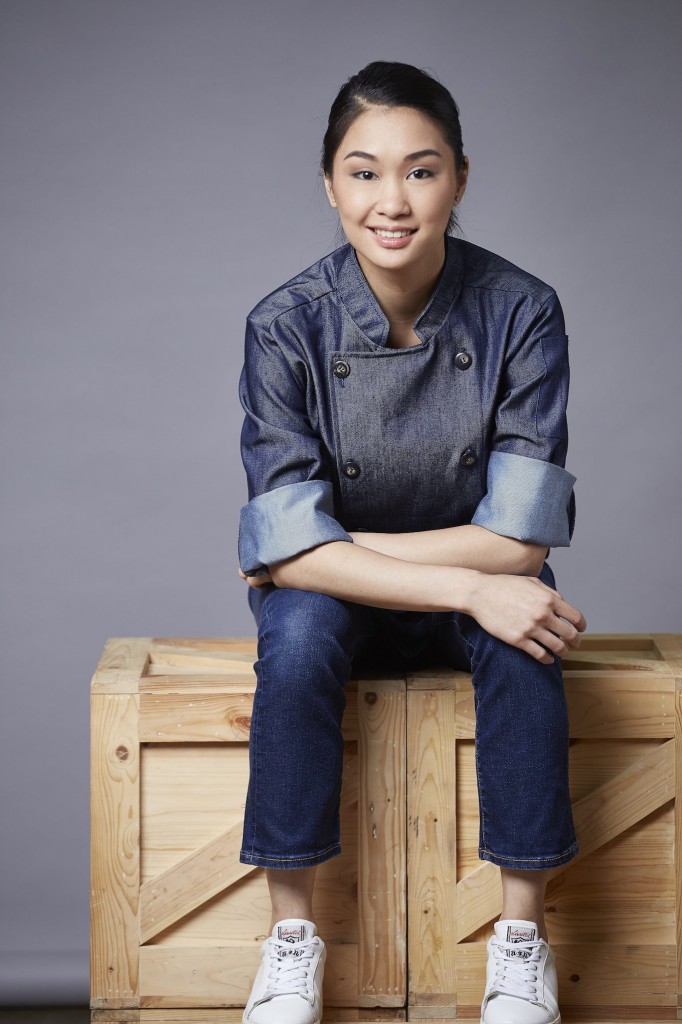 As a fresh graduate of the International Culinary Center in NYC, Chef Tam worked at such prestigious restaurants as Jean-Georges, and Dan Barber’s Blue Hill at Stone Barns. Upon returning to Thailand in 2017 she became interested in sustainable farming and agriculture, and at 29 became the youngest chef to compete in Top Chef Thailand. After that, she travelled the world promoting Thai cuisine and worked as Chef Ambassador for Thai Harvest / SOS and UNEP campaigns between 2015 and 2017. A recipient of the MBE (an order of the British Empire award), Chef Claire Clark is considered one of the best pastry chefs in the world. Her patisserie company, Pretty Sweet, counts the British Parliament’s House of Commons among its clients. Before starting her business, she lectured at the Cordon Bleu culinary institute and worked at The French Laundry, a three-Michelin star restaurant. Her accolades include Restaurant Magazine’s Best Pastry Chef and the prestigious Meilleur Ouvrier de la Grand-Bretagne. “Pao” Sutakon Suwannachot is a Chef de cuisine, patisseries, ice cream specialist, food stylist, creative director, chef specialist consultant restaurant and hotel. He has worked in the Bangkok and also has a production company called M.U.M Innovation. He is 1 of 16 contestant in MasterChef Thailand, 2017 and 1 of 10 contestant in Top Chef Thailand Dessert, 2019. The proceedings will kick off with a glittering gala dinner on the 6th of September held at Anantara Siam’s ballroom giving guests a taste of what’s to come during the festival: exquisite starters from Sugio Yamaguchi and Peter Gast, mains from Nicolas Isnard and Davide Caranchini, dessert from Claire Clark and petit four from Anupong Nualchawee, Anantara Siam’s Executive Pastry Chef. The experience is open to the public and tickets are available for THB 8,500++ for a five-course meal including wine pairings.

During the festival, each chef will host between two to three exclusive dinners in the hotel’s award-winning Biscotti, Madison, Spice Market, Guilty and Shintaro restaurants, while English master pâtissier Claire Clark, rightfully considered one of the world’s best pastry chefs, and Bangkok’s own Sutakon Suwannachot of the MasterChef Thailand and Top Chef Thailand Dessert fame will be showcasing their refined confectionery in the Lobby Lounge throughout the week.

At Biscotti, Christian Martena of Bangkok’s Clara restaurant will be serving up a veritable Italian feast on the 7th and 8th of September, followed by two more nights of Italian extravaganza courtesy of Davide Caranchi named Best Italian Young Chef 2018 by L’Espresso restaurant guide and whose restaurant Materia made it into the ‘50 Best Discovery’ collection by the World’s 50 Best.

At Madison steakhouse, Nicolas Isnard will give two dinners, on the 7th and 8th, showing the foodie crowd why, at 27, he was awarded the notable “Young Talent” award by the Gault Millau guide. On the 9th and 10th of September, the Madison kitchen will be taken over by another culinary star, Amerigo Sesti. Having earned his stripes at Jean-Michel Lorain’s celebrated Côte Saint Jacques, he is now heading the kitchen at J’AIME by Jean-Michel Lorain, one of Bangkok’s top restaurants.

Lovers of French cuisine will find an unmissable offering at Shintaro, where Sugio Yamaguchi will be recreating the spirit and flavours of France’s Lyon region on the 8th, 9th and 10th of September.

At Spice Market, Chudaree “Tam” Debhakam, the youngest chef to ever compete in Top Chef Thailand, will be serving up authentic Thai dishes on the 8th, 9th and 10th.

As has become a tradition in recent years, the exclusive fringe events will return, including the hugely popular World Gourmet Brunch on Sunday, 11th September 2022. Designed to appeal to both aspiring chefs and professionals alike, daily cooking classes by all the visiting chefs will offer a unique opportunity to learn new techniques, as well as sampling specially prepared dishes from the chefs’ World Gourmet Festival repertoire and a wine master class on 7th. The 22nd World Gourmet Festival is a proud supporter of Foundation for the Welfare of Rajavithi-Girls’ Home Under the Patronage of Her Royal Highness Princess Soamsawali. THB 600 per dinner ticket sold and proceeds from the auctions, which take place throughout the festival, will be donated to the Fund.

Reservations for the 22nd World Gourmet Festival at Anantara Siam Bangkok Hotel are essential and can be made by visiting www.worldgourmetfestival.asia, where detailed information and prices of all the events are available, or email: wgf.asia@anantara.com or telephone +66 2 126 8866.

Anantara Siam Bangkok Hotel’s Amazing World Gourmet Festival accommodation package offers gourmands a sumptuous opportunity to experience an extraordinary international culinary feast by some of the world’s best chefs in the heart of one of the world’s most enigmatic capital cities.  Starting from THB 16,000++ per room per night, this special offer includes accommodation for two, a sumptuous daily buffet breakfast, and a table for two at a guest chef’s dinner each night of the stay period.  For more information about this special offer or to make a reservation, please visit www.anantara.com/en/siam-bangkok/offers or contact Anantara Siam Bangkok Hotel on email reservations.asia@anantara.com or telephone +66 2 126 8866.