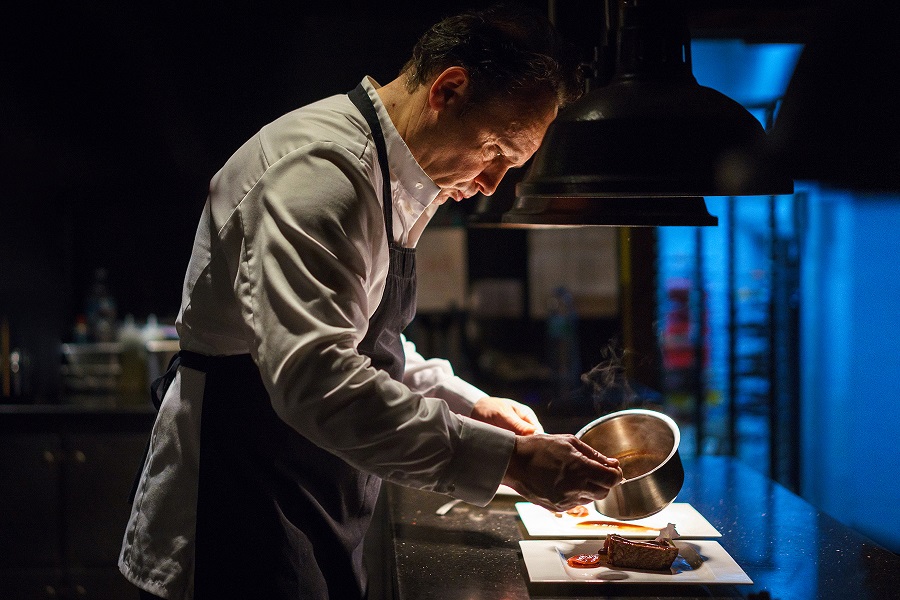 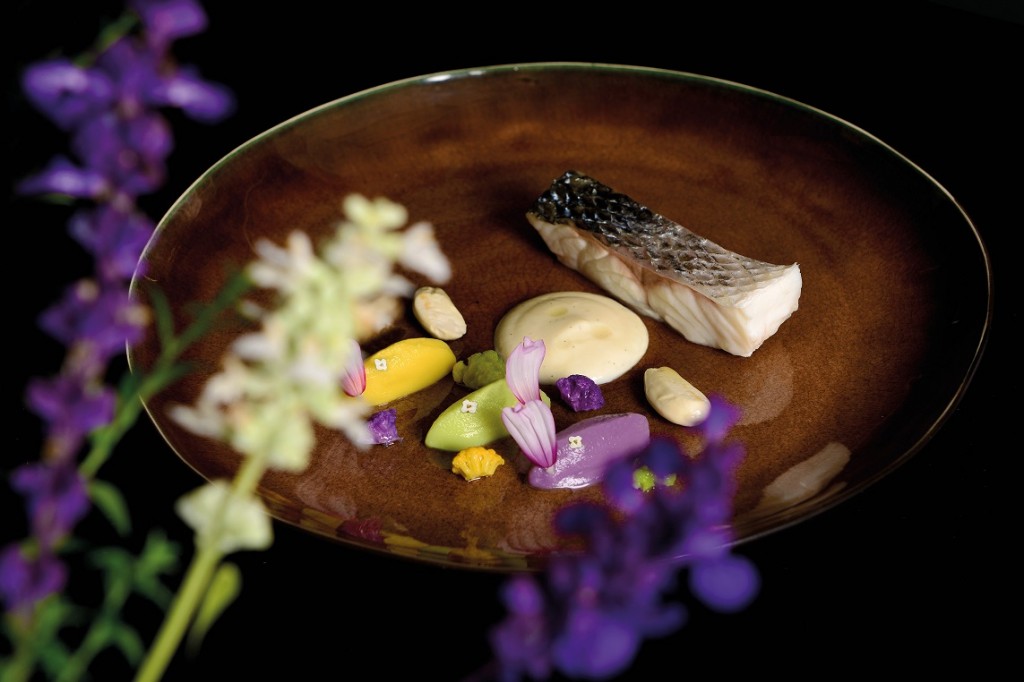 Following a family tradition of cooking with natural and local products, Chef Thierry fell in love with the art watching his father preparing the family meal every Sunday morning. Soon enough, he began his own ambitious culinary career as Chef de Partie at the age of 21. Working alongside a number of renowned chefs, he set the highest standards possible for his cooking, eventually opening his own restaurant, the Thierry Drapeau Logis de la Chabotterie in Saint-Sulpice-le-Verdon, France. Chef Thierry has garnered universal recognition of excellence, holding a coveted two Michelin stars for the past eight years.

2-Michelin Star Chef Thierry Drapeau expresses his inspired talent in a style called “cuisine of the soil” for its authentic jus-based dishes with a highly concentrated taste using local produce from the soil and the sea nearby. In Chef Thierry’s cooking, only the highest quality produce is used and his dishes maintain a lightness, low in butter but high in flavour. Chef Thierry much prefers using flowers and herbs as opposed to spices for his exquisite cuisine

According to Chef Thierry, a dish must be worked on like a wine, taking time to look for “a balance combining herbaceous and floral notes; to work on the acidity, the bitterness and the sweetness”.

For more details and reservations, please contact:
Ms. Sudarat via 083 820 4224 or email: afbm@viehotelbangkok.com 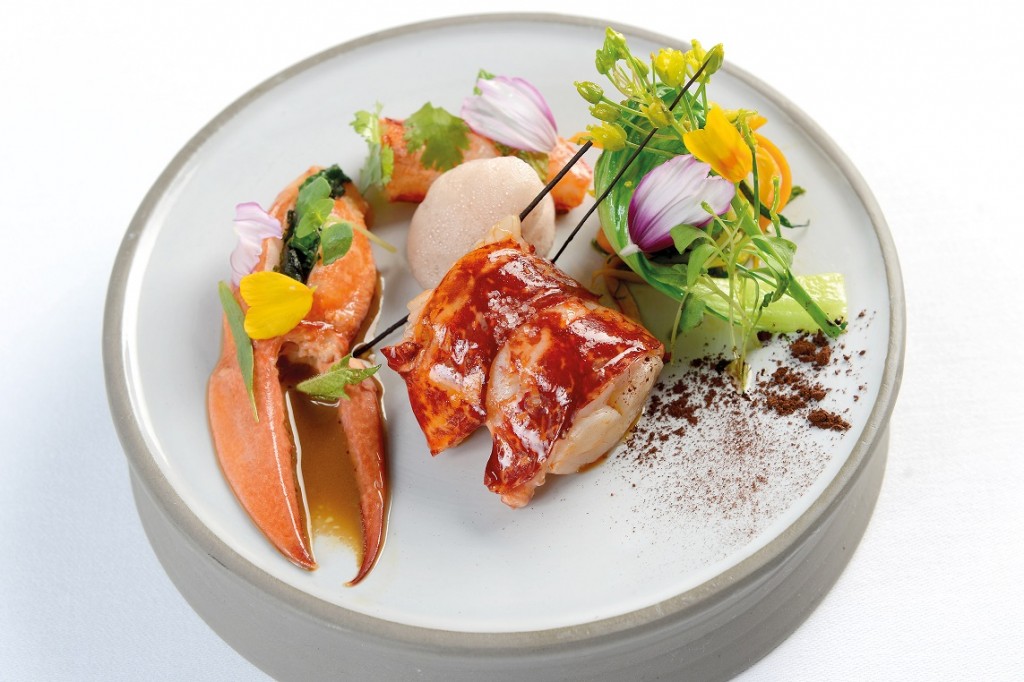 2-Michelin Star Chef Thierry Drapeau is the chef and co-owner of the Thierry Drapeau Logis de Chabotterie restaurant in Saint-Sulpice-le-Verdon, in the Pays de la Loire region of France.

Originally from Nantes, Chef Thierry fell in love with the art of cooking as a boy while watching his father prepare the family meal every Sunday morning. He embarked on his own culinary career as Chef de Partie with Bateau Ivre at the age of 21. With a personality both modest and determined, he worked attentively alongside a number of renowned chefs, setting the highest standards possible for his own cooking.

Ever ambitious, Chef Thierry eventually opened his own restaurant, the Thierry Drapeau Logis de Chabotterie. Within a decade, in 2011, he received the prestigious recognition of two Michelin stars.

Chef Thierry Drapeau’s inspired style is called a “cuisine of the soil”, using local produce from the land and sea nearby and creating highly concentrated tastes. Only the highest quality produce is used. His authentic jus-based dishes are low in butter and so maintain a lightness with very distinct and rich flavours.

According to Chef Thierry, a dish must be worked on like a wine. The chef must take his time to discover a balance which combines herbaceous and floral notes, finding the perfect relationship between the acidity, the bitterness and the sweetness. 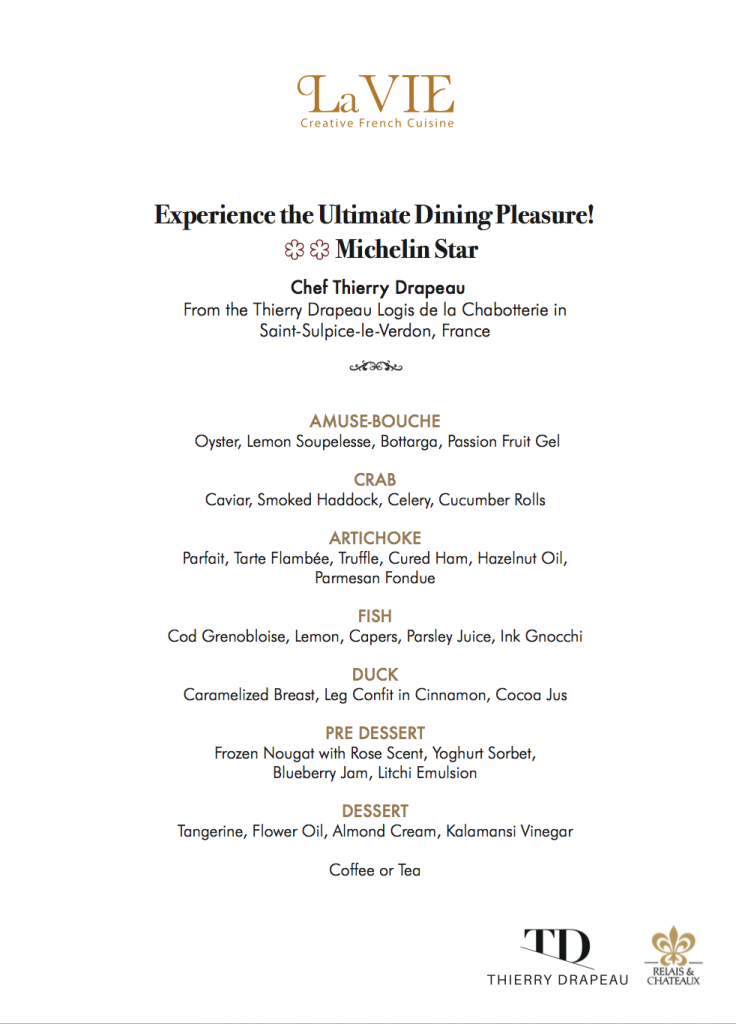